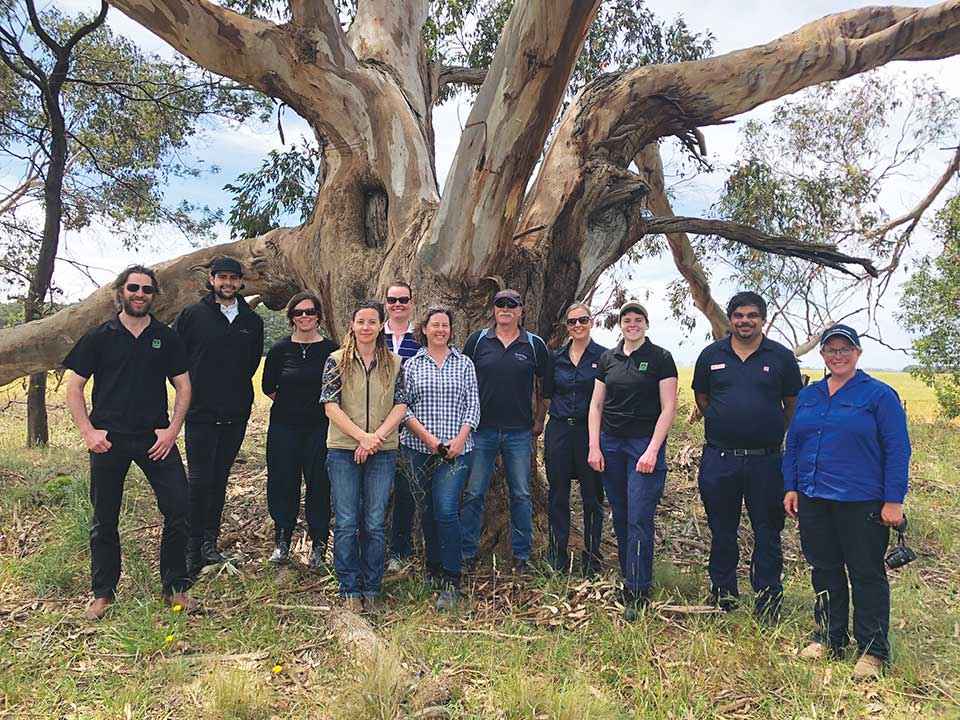 Each site recorded on the register tells a story of the past that goes back many thousands of years and demonstrates that there is still much to learn about our Aboriginal history.

If you think you have found an Aboriginal cultural heritage place or objects on any public or private land in Victoria, you must report it to Aboriginal Victoria under the Aboriginal Heritage Act 2006.

Corangamite
The CMA and the Landcare community have undertaken a Landcare review in the region to enhance relationships between government and community natural resource management.

The review consisted of workshops with Landcare group and network chairs and Landcare facilitators, and interviews with key stakeholders. It aims to ensure a better alignment between Landcare and the CMA’s Regional Catchment Strategy.

Planning is underway for the Otway Food and Fibre Showcase to be held on 28 April 2019 at the Colac Showgrounds. This biennial event attracts great presenters and a wide variety of local producers.

After seven years at the CMA in Regional Landcare Facilitator and Coordinator and management roles, Bret Ryan has left to follow a career in business management. We wish Bret all the best for the future.

For further information: visit www.ccma.vic.gov.au/what-we-do/community/landcare.aspx or contact Corangamite CMA on 5232 9100.

The Friends of the Upper Nicholson Catchment Inc. hosted a lyrebird awareness lunch in October 2018. The lunch was held at Clifton Creek and included guest speakers from the Sherbrooke Lyrebird Survey Group. A dawn walk was held the next day to survey lyrebirds on a property adjacent to the Nicholson River.

The Far East Victoria Landcare Network celebrated 10 years of operation in November 2018. More than 80 Landcarers attended a dinner of local produce including microgreens and beer supplied by 21 local producers. Each of the network’s Landcare groups gave a presentation on a project, passion or person.

Recent rainforest walks, and plant identification weekends have also been well attended and well received in the region.

Glenelg Hopkins
Congratulations to the 16 groups that were awarded 2018/19 Victorian Landcare Grants for a range of on-ground projects and capacity building activities.

Thank you to all groups that completed the annual Landcare Group Health Survey. The data provided will help to provide targeted support to groups and the information will be included in the region’s annual Landcare Report Card.

For more information: visit www.ghcma.vic.gov.au/get-involved/landcare-and-grants/ or contact Tony Lithgow on 5571 2526.

Goulburn Broken
The end of 2018 has seen the community natural resource management networks in the region in full swing delivering their National Landcare Program (NLP) projects. A lot of effort has been put into getting occupational health and safety and governance issues sorted so that groups can continue to work on their projects under the new NLP rules.

Projects that were funded by the 2018/19 Victorian Landcare Grants are underway, and 21 Group Support Grants have been allocated across the region.

Our Regional Landcare Facilitator Ashley Rogers started her maternity leave in November 2018. We wish her all the best for the adventure ahead. Kerstie Lee from the Up2Us Landcare Alliance will be filling the position while Ashley is away.

Seasons greeting to all in the region. 2018 was a great year. The contribution and commitment of our community volunteers and support has been overwhelming.

For further information: visit www.gbcma.vic.gov.au/community_natural_resource_management or contact Tony Kubeil on 5761 1619.

Mallee
With the challenge of extremely dry conditions and heavy frosts in 2018, farmers in the Mallee were faced with tough decisions on whether to persist with a crop, cut it for hay or graze it. Responding to the same dry conditions, some Landcare groups started ripping rabbit warrens earlier than usual.

Congratulations to Cardross Primary School, Koorlong Primary School, Murrayville Community College, Nichols Point Primary School and Tyrell College on their success with the 2018 Victorian Junior Landcare and Biodiversity Grants. We look forward to seeing students working on their projects at school and on local reserves.

In late November Louise Nicholas resigned from the RLC role at Mallee CMA. We wish Louise all the best for the future.

For further information: visit www.malleecma.vic.gov.au/about-us/programs/community/landcare.html or contact the Mallee CMA on 5051 4377.

North Central
The region hosted a successful Chicks in the Sticks event in October 2018 to celebrate the achievements of rural women in environment and agriculture. Jointly hosted with the Goulburn Broken CMA, this was the sixth annual event held in the region. Guest speakers included Bronwyn Blake, author of Gulf Women – Voices from remote North West Queensland, and Cath Walker from the Royal Flying Doctor Service.

Bronwyn delighted the audience with readings from her book, including tales of kitchen floor births, snakes attempting to strangle sleeping children and station cooks causing chaos. Cath emphasised the importance of caring for one another, especially during dry times, and watching for signs of mental health issues within the farming community.

For more information visit www.nccma.vic.gov.au/landcare or contact Tess Grieves on 5440 1890.

For more information: visit www.necma.vic.gov.au/solutions/landcare-community-groups or contact Tom Croft on 02 6043 7648.

Port Phillip & Western Port
Landcarers from the region were delighted to see Jacqui Wandin and Brooke Collins accept the Australian Government Partnerships for Landcare Award at the National Landcare Awards in Brisbane in October 2018. The pair accepted the gong for their work with the Wandoon Estate Aboriginal Corporation at the Coranderrk homestead and farm in the Yarra Valley, a project empowering Wurundjeri people. The CMA is a partner organisation for the estate.

Four individuals and groups from the region were assisted in attending the National Landcare Conference with DELWP funding. They are set to bring a host of new ideas and innovations to their groups.

New Regional Landcare Coordinator Barry Kennedy was welcomed by Landcare facilitators and Landcare network leaders with a tour of existing and potential project sites, and the many gems in the region.

For more information: visit www.ppwcma.vic.gov.au/landcare/ or contact Barry Kennedy on 0447 821 559.

West Gippsland
West Gippsland was fortunate to host two recent international Landcare delegates during their Gippsland tour as part of a program to share ideas and extend the Landcare movement worldwide.

The West Gippsland region welcomes Scott Elliott to the position of Network Coordinator and Caitlin Jackson as the new Project Officer in the Yarram Yarram Landcare Network.

South Gippsland Landcare Network’s Kate McKenzie has taken 12 months maternity leave and Glenn Brooks-MacMillan has stepped into her role. Cassie Wright will also join the Network as a part time Project Officer assisting in a range of projects.

For more information: visit www.wgcma.vic.gov.au/getting-involved/landcare or contact Marnie Ellis on 1300 094 262 (Kathleen Brack is on maternity leave).

Wimmera
We welcome Al Stephens as Manager of the Project Platypus (Upper Wimmera Landcare Network). Al has previously worked with Project Platypus and has contributed much to the collective Landcare effort in the Wimmera. Al takes over from John Pye who deserves recognition for his enormous volunteer effort to steer the Landcare network through a period of change and secure a bright future.

The Landcare Victoria Incorporated Grampians Landcare Forum will take place from 29 –31 March 2019 at Halls Gap. The event is being supported by Wimmera and Glenelg Hopkins CMAs and local Landcare facilitators and will have a focus on Aboriginal engagement and participation, and sustainable agriculture.

The Wimmera Regional Landcare Awards will again be incorporated into the Volunteering Recognition Awards in partnership with the Centre for Participation. Nominations open 13 February 2019 and close 13 March 2019. Forms and further details are available on the Wimmera CMA’s website.

For further information: visit www.wcma.vic.gov.au/get-involved/landcare or contact Joel Boyd on 5382 9919.