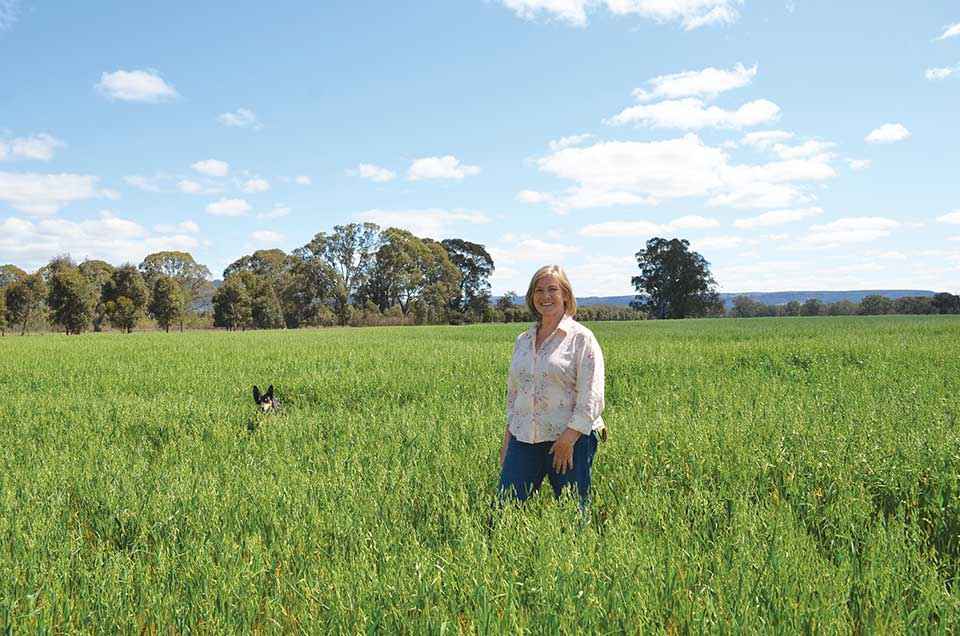 Above Leanne Jackman from Dadswells Bridge is a passionate Landcare advocate.

There are many inspiring women active in Landcare projects across the Wimmera. Here are just four of these busy and committed women.

Madelene Townsend
Madelene Townsend has always been fascinated by nature and how resilient it is, especially in Australia. She was born in Sussex, England, and has rich childhood memories of living in a market garden with her parents. They grew vegetables, flowers and nuts and kept chickens. She remembers disappearing to play in the woodlands and seeing squirrels, rabbits and deer through the changing seasons.

Madelene and her husband Terry moved to Moyston from Melbourne in 2005 when they retired. Madelene was keen to learn more about the local bush.

“I went to my first meeting of the Moyston Landcare Group and I was hooked. I thought, wow, this is just fantastic, and I knew I wanted to join.”

Penny Warner
Born and bred in Stawell, Penny Warner’s connection to the land started in childhood when she visited her grandparent’s farm in Moyston.

Penny Warner has helped Project Platypus (Upper Wimmera Landcare Network) for several years at their annual plant outs. The plant outs require a huge commitment from volunteers – not just in tree planting, but also in catering and organising.

Penny has helped Project Platypus (Upper Wimmera Landcare Network) for several years at their annual plant outs. The plant outs require a huge commitment from volunteers – not just in tree planting, but also in catering and organising.

For the past four years Penny has prepared morning-teas of cakes and scones for the plant outs. Her evening leisure time is spent making up hundreds of tree guards. She is a great community asset.

Penny volunteers because she simply enjoys it.

“I get to mix with people, instead of sitting at home. And I get out in the bush and it is beautiful,” she said.

In 2006 Madelene was elected as the group’s secretary and treasurer.

“I struggled in the beginning because I was new to the community. I felt like a complete stranger, but with the encouragement and support of the serving presidents I gained the confidence to tackle grant applications and other projects. It was a big learning curve, but I enjoyed it,” Madelene said.

Madelene’s warmth and sincerity shine through in all that she does. Most recently she has been running cake stalls to fundraise and promote Landcare. Madelene believes fun, family orientated gatherings and interaction with children helps foster and develop enthusiasm in Landcare.

“You plant little seeds of thought and then people get interested and it grows from there. The benefits are huge – what was once barren land in our area is now full of trees and wildlife – what more could you want,” she said.

Leanne Jackman
Leanne was brought up in outback Australia and has always had a love for nature, but she credits Landcare with shaping her understanding of the impact of humans on the environment.

“If we want to have a beautiful environment for the next generation we need to look after what we have,” she said.

Leanne runs a biodynamic farm with her husband Peter at Dadswells Bridge, on the edge of the Grampians. She believes the philosophies behind biodynamics and Landcare are closely aligned, for example a focus on healthy soils, encouraging biodiversity and a natural balance in the environment.

Native grasses have been allowed to thrive on Leanne and Peter’s farm and tree corridors and plantations have been incorporated to increase biodiversity.

Leanne started her Landcare journey at plant outs for Project Platypus (Upper Wimmera Landcare Network). Her gentle nature, ability to bring people together and solve problems has made her an asset to the Landcare community. She is a passionate Landcare advocate, keen to share her views on the environment. She works in a voluntary capacity for Landcare locally, regionally and at a state level.

“It concerns me that people take what we have for granted, they think it is always going to be there,” Leanne said.

Leanne is the current secretary of Northern Grampians Landcare Group, a board member of Project Platypus (Upper Wimmera Landcare Network) and the secretary of Landcare Victoria Incorporated.

Angela Turrell
Angela Turrell is a member of Jallukar Landcare Group and a past representative on the Project Platypus (Upper Wimmera Landcare Network) Board.

According to Jess Gardner from Greening Australia, Angela’s passion, along with her professional background, has made her an asset to Landcare.

“I first met Ange when we started the Jallukar Native Grasslands Project (JNGP) together. Her professionalism, business and marketing skills have brought so much to the project. She has a passion for wildflowers and native grasses of the area which has inspired many others to
get involved,” Jess said.

Angela has contributed to Jallukar Landcare Group by using her skills in project management, grants writing and report writing. She also assisted with strategic planning to help inform the group’s direction.

Angela has contributed to Jallukar Landcare Group by using her skills in project management, grants writing and report writing. She also assisted with strategic planning to help inform the group’s direction.

The group was keen to be proactive about sourcing grants. With Angela’s input they have sourced grants for JNGP that have aligned with the group’s goal – of restoring and revegetating the environment.

“The JNGP has galvanised members because it intrinsically values flora and fauna. There has been a groundswell of support for the project and this can be seen in the growing membership base of the group. The group is incredibly social and with a hell of a lot of expertise,” Angela said.

Angela is recognised locally as being a model of expertise, dedication and tenacity. She is a greatly valued member of the group and her community.