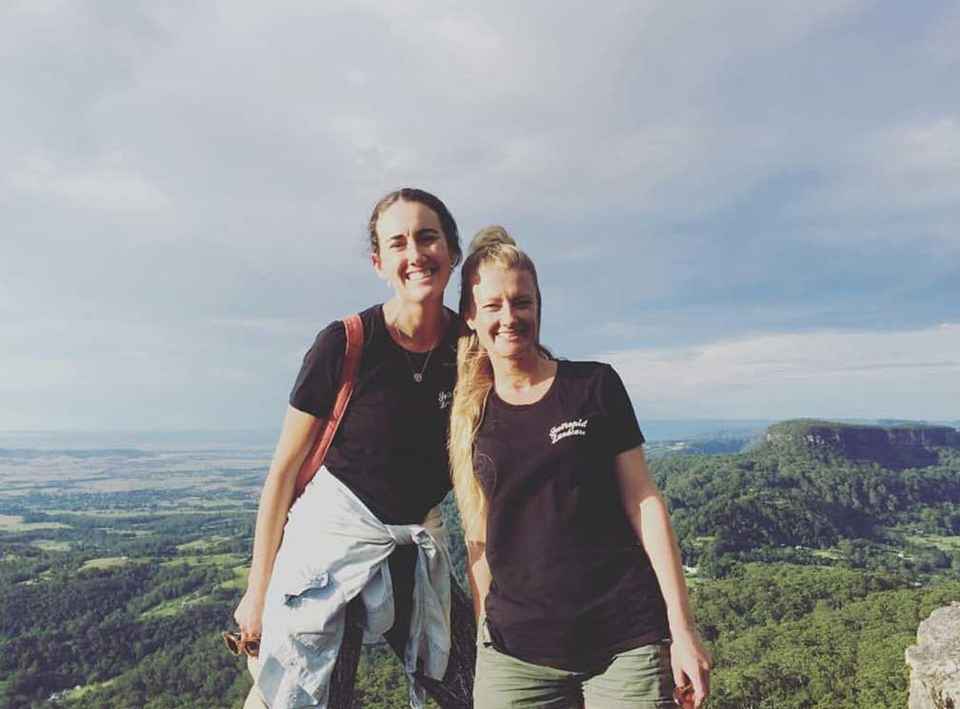 Above Naomi Edwards (left) and Megan Rowlatt on a sunrise hike in the Barren Grounds Nature Reserve on the south coast of NSW.

Getting involved in Landcare was a simple yet fortunate accident for Megan Rowlatt and Naomi Edwards, co-founders of Intrepid Landcare, an organisation created to inspire, connect and empower young people to join local environmental initiatives in their communities.

Megan’s Landcare journey began when she saw a Conservation Volunteers Australia advertisement on television in Wollongong. She wanted to get outside and do something meaningful and was feeling a lack of connection and social isolation at the time. Naomi was at the local supermarket a year after leaving school when the trusted parent of an old school friend invited her to get involved in Coastcare along the Gold Coast. Both women were attracted by the appeal of something fun, and the potential to learn and connect with other like-minded people.

More than a decade later, Megan and Naomi are Landcare trailblazers. They are passionate about getting young people involved in Landcare projects that restore landscapes (from urban to remote), catchments, coastal systems, and the marine environment, and sharing what Landcare can offer for individual and community wellbeing.

The appeal of getting involved in Landcare is that it is taking action on environmental issues that are extremely important to me – that being restoring our local urban environment. I never gave much thought to being a woman in Landcare, I just jumped in and was supported from the start.

Megan credits her mentors
“The appeal of getting involved in Landcare is that it is taking action on environmental issues that are extremely important to me – that being restoring our local urban environment. I never gave much thought to being a woman in Landcare, I just jumped in and was supported from the start,” Megan said.

“Older men were dominant at that time, but this wasn’t something that phased or limited me. In fact they turned out to be my greatest mentors in life and that cannot go unacknowledged.

“Landcare offers me access to a connected community of human beings, a place where I am able to find people who share interests, passion and purpose. I feel heard, I am in service to my community and the environment, and I am supported. It’s about being part of a community that wants to thrive and grow together. I feel that’s what Intrepid Landcare offers particularly well. They are my family.

“But what I also feel is important to acknowledge is that my deep and genuine connections to women within my own generation (and older generations) didn’t come into my life until I started creating projects for other young people to get involved in. Naomi was one of those women. Our projects have attracted a lot of like-minded women who share a love of nature and adventure, and that has been such a beautiful thing to experience,” Megan said.

Naomi stresses the importance of diversity
Naomi’s experience is similar to Megan’s, but she is definitely aware of a gender inequality in Landcare, which is a reflection of the wider society.

“You can’t deny gender imbalance when it comes to the decision makers in Landcare, the people who hold positions of power and authority on boards and committees, and especially in government and parliament. This is where a framework for equality and accessibility needs to be considered and meaningfully implemented,” Naomi said.

“It is interesting that when I was in the field and getting dirt under my nails I did feel equal. However as soon as I was around the table in certain Landcare boards and committees in my early twenties, I didn’t feel equal. I even considered buying some R.M. Williams boots and a few more checked shirts (no kidding!) so I looked more like everyone else. But with some mentoring from other women around the table, I realised I could be free to be myself, and that I don’t have to look or be like everyone else to be valued and heard.

“I can wear my bright and colourful dresses, and change my shoes between field trips and board meetings. When I embraced my difference, I started to feel included which encouraged me to take on other roles and pave the way for more women and young people to be elected into certain positions.

“The point I’m making is that we need diversity, and we need to celebrate diversity. But to get diversity we also need supportive environments to encourage all people to flourish in their own way, so they can see themselves as contributors and be prepared to contribute,” Naomi said.

Intrepid Landcare welcomes both men and women. Megan and Naomi are aware that as Intrepid Landcare evolves and matures they need to remain aware of diversity and to make sure blind spots don’t develop. They are constantly questioning accessibility and diversity so that more young people from all walks of life can be connected to the environment and a community that supports them to thrive and grow.

Intrepid Landcare welcomes both men and women. Megan and Naomi are aware that as Intrepid Landcare evolves and matures they need to remain aware of diversity and to make sure blind spots don’t develop.

Toni Stevens is a science communicator from Melbourne. She became involved in Intrepid Landcare in Wollongong in 2009 and hasn’t looked back since.

Intrepid Landcare offers coaching, presentations, workshops and adventurous leadership retreats for young people keen to get involved in the environment.

To find out more go to www.intrepidlandcare.org

Read next article: Four inspiring women of the Wimmera