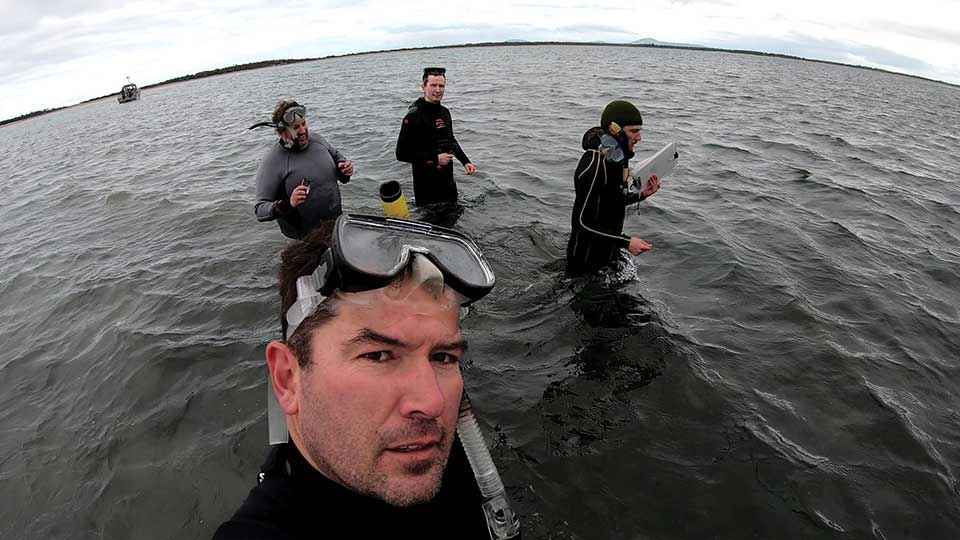 Above Yarram Yarram Landcare Network’s Project Officer Jason Pickering (in foreground) going out with a team to test the seagrass beds and check results.

A community-led seagrass restoration project at Corner Inlet is leading the world in restoring a vital and little understood habitat through cooperation between community, scientific organisations and government agencies.

Corner Inlet is one of the few remaining commercial fishing grounds able to deliver fresh fish to the Australian market. Nineteen commercial fishers are licenced to fish for King George Whiting, southern calamari, rock flathead, southern garfish and gummy shark and supplies much of Australia. The industry brings in $2.8 million each year.

A healthy fishing industry requires healthy seagrass beds. A recent spike in the number of the native purple-spined sea urchin at Corner Inlet has decreased the broadleaf seagrass in the area by thousands of hectares. The urchin eats the seagrass, and this has reduced much of the seagrass beds to a marine desert. Local commercial fishermen were first to notice the problem and reached out for help.

Despite divers removing 57,000 urchins by hand in 2017 the problem persists. Broadleaf seagrass is slow growing, so a way had to be found to regenerate it as quickly as possible.

Healthy seagrass beds are vital for the marine environment.

Seagrass is a huge living ecosystem providing shelter and food for a wide range of creatures, from tiny invertebrates, fish, turtles, dolphins, birds and many other creatures.

While seagrasses worldwide occupy only 0.1 per cent of the total ocean floor, they are estimated to be responsible for up to 11 per cent of the carbon buried in the ocean. One hectare of seagrass can capture up to 830 kilograms of carbon each year and it absorbs carbon 35 times faster than a rainforest. Each day one square metre of seagrass generates 10 litres of oxygen. Seagrass meadows also slow the flow of incoming water by trapping sand and nutrients in their root systems and this can minimise the damage caused by flooding.

In 2019 the Yarram Yarram Landcare Network (YYLN), commercial fishers and many volunteers supported by marine scientist Dr John Ford from the University of Melbourne trialed the planting of seagrass on a denuded site at Corner Inlet. Fishermen collected the seeds which were carefully placed into sand-filled hessian bags and taken out to sea in fishing boats to be ‘sown’ at low tide. This took many volunteers working skillfully and quickly. Various grades of sand and different densities of planting were tested. Reviews of the site have determined the best options for the major plantings that will get underway during the 2019/20 summer.

The project is being delivered in two phases with funding from a Victorian Government 2018 Community and Volunteer Action Grant and a National Landcare Program Smart Farms Small Grants Round 2. The combined funding will help plant 200 hectares of seagrass in the next year or two.

The project has inspired the whole community. It involves commercial fishers, YYLN, DELWP, Parks Victoria, the West Gippsland CMA and Coastcare. Rotarians have expressed an interest with helping out, as have local primary and secondary school children. A number of Intrepid Landcare members from Melbourne will also assist and will camp out at the now disused Port Albert Racetrack, combining work with fun.

Dr John Ford said this was the first time the commercial fishing industry had united with scientists and Landcare to do something big for the environment.

“There are a couple of other projects around the country in WA and NSW, but the key thing about this project which makes it so different is that we are working with local Landcare groups and commercial fishermen,” Dr Ford said.

The project has also identified another potential use to help manage the numbers of purple-spined sea urchins. The government has issued commercial fishing licences to remove them and local chefs are now working up their recipes. Hopefully they’ll be coming to a table near you soon.

Trevor Colvin is a board member of Yarram Yarram Landcare Network and a former magazine publisher and journalist with The Age.