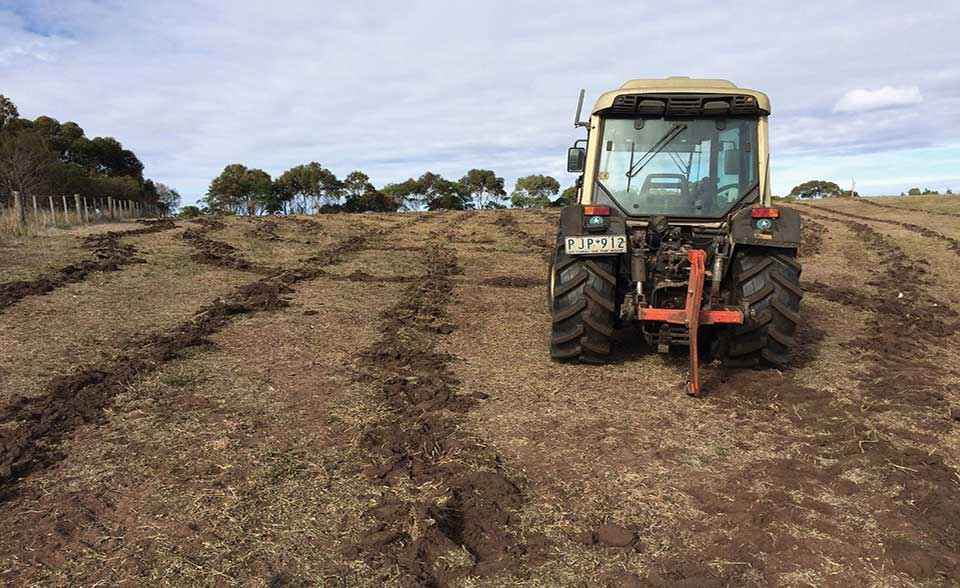 Protecting remnant vegetation and restoring denuded areas has been a key aim of the whole farm plan at Geoff and Joan Anson’s Barwon Ridge property in the Barrabool Hills, west of Geelong. As well as four hectares of vines, Barwon Ridge has a small flock of merino sheep and an orchard of heritage fruit trees.

Since 2000 remnant vegetation has been fenced off, shelter belts established, and bog plants and crayfish in a local creek protected from livestock.

In 2015 Geoff and Joan started the revegetation of 4.5 hectares of denuded paddock. They focused on indigenous species aiming to create something close to the natural bushland that once covered the area. Seed was sourced locally to ensure its provenance. Approximately 25 different species were planted.

Considerable thought was given to site design and planning. The Otway Agroforestry Network and consultant Steven Murphy provided advice. Species were grouped in different sized clumps according to their final form. A corridor of lower growing species was planted under a power line.

To make future management easier a number of rarer plants selected for seed collection (broad leafed sweet bursaria, white cypress pine, lightwood and silver banksia) were planted along the access tracks, together with spotted gum and red ironbark for logging.

Life for the young plants has been tough. The soil is sandy over shallow limestone bedrock and the site has an average rainfall of 500mm. Even after ripping and weed control, losses in some areas were high. Several replants have been necessary over the past five years.

Snails and old pasture grasses including phalaris and sand rocket are ongoing threats. Some weeds are being sprayed and in other areas the growing trees are starting to keep the weeds under control.

As one target is achieved new challenges are being met. This year small plots of kangaroo grass were planted. Weeping grass is under propagation and other ground plants such as chocolate lily are being investigated. Trimming of the logging trees has also just started.

Wildlife returned quickly once the habitat became established. Blue tongue lizards are breeding, kangaroos rest in the shade of the trees and the bird life has exploded. The homemade bee hotel has lodgers.

The site has brought countless hours of pleasure to everyone involved. Barwon Ridge won the 2019 Geelong Chamber of Commerce Clever, Creative and Sustainable Business Award for the sustainable whole farm approach to the vineyard and land management.

Geoff Anson said the site was a haven during the recent lockdown.

“One of the joys during the COVID-19 lockdown was our daily walk through lush stands of giant hop bush, yellow gum and wirilda wattle, while listening to the bird chorus and savouring the heady smell of the tree violets,” Geoff said.

Joan agreed. “It’s especially satisfying given that the area was a dry, weed-infested paddock just five years ago,” she said.

Read next article: Growing and transplanting murnong – a cultural and commercial crop