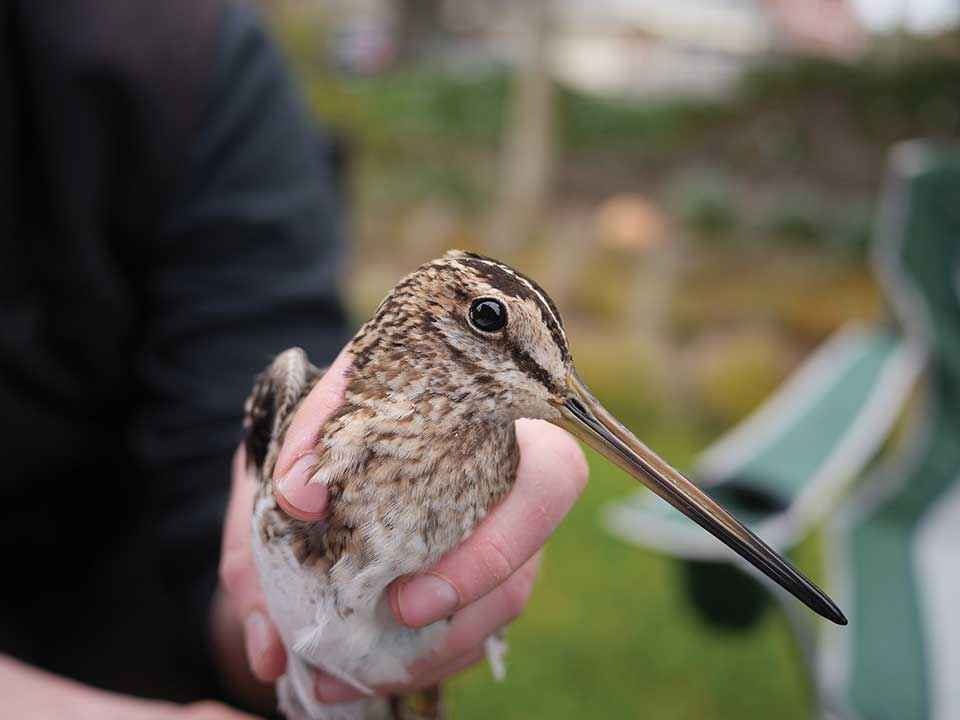 Above A Latham’s snipe is checked by a volunteer.

South Beach Wetlands and Landcare Group, based in Port Fairy, is involved in a collaborative research project to better understand the ecology and habitat use of Latham’s snipe (Gallinago hardwickii), a shorebird species that breeds in Japan and migrates to Australia for the spring and summer.

The group had been working to protect the habitat of the snipe for many years before the research started. The collaboration developed after Dr Birgita Hansen, a research fellow at the Centre for eResearch and Digital Innovation at Federation University Australia, provided some expert advice for the group.

The Landcare group had people, accommodation for visiting researchers and long-term onsite knowledge about the birds. Birgita had access to scientific knowledge, ethics and banding approvals, and specialist equipment.

Birgita was also part of a wider network of people with an interest in migratory birds and she initiated the Latham’s Snipe Project in partnership with the group.

In 2015 the Landcare group was successful in obtaining funding from the Victorian Government under the Threatened Species Protection Initiative and the Victorian Landcare Grants Program. The grants also included funding for school and community engagement, survey work, Indigenous art projects, habitat restoration, and radio-tracking tags.

Federation University Australia, on behalf of the Latham’s Snipe Project, was also successful in obtaining funding from the Australia Japan Foundation for data loggers. This has led to a strong relationship with the Wild Bird Society of Japan. Several Landcare members have visited Hokkaido to see the birds there.

Managing the different perspectives and expectations from the project has been challenging, but ultimately very rewarding.

According to Birgita, who is an ornithologist, working with a community group means the community are co-researchers.

“Both partners shape how the research is done, and the knowledge is owned and understood much more widely. The knowledge becomes part of a community story. This makes my work as a scientist more connected and meaningful.

“The community is coming from lots of different angles: habitat protection, land management, the impact of development and social, cultural and artistic issues.

“At a practical level it’s the local people that know the locations, know who lives where, and put in hours radio tracking tagged snipe in between researcher visits. This has greatly increased the amount of data that has been collected,” Birgita said.

The Landcare group began working to protect the snipe habitat wetland area in 1989. The wetlands and the birds are part of our daily lives. Our kids walk to school past the wetlands, the birds fly over our houses at dusk. It’s the community that lives with the consequences of any research, or decisions that are made about an area.

The research has produced some exciting results. The data loggers allowed us to record the first complete migration of a snipe from Port Fairy to Hokkaido and back. The research confirmed that the birds return to the same location. The radio-tracking in Port Fairy has shown that birds regularly fly between local daytime and night-time habitats. These discoveries have important consequences for protection of habitat and the species as a whole.

Managing the different perspectives and expectations from the project has been challenging, but ultimately very rewarding.

The diversity of viewpoints in a collaborative research project keeps everyone on their toes. We’ve had valuable discussions with the researchers about how long particular aspects of the research should continue, how often surveys should happen and what the value of a particular activity is. Within the framework provided by ethics and wildlife permits, the research has evolved in response to findings and needs. This has been very satisfying.

It’s also important for researchers to understand that community members are volunteers. Sometimes life gets in the way and things don’t happen exactly to plan.

The research has given us a wonderful opportunity to get up close to the birds. I was extremely emotional the first time we caught a snipe. We’d devoted many thousands of hours to protecting them and their habitat. When the bird was only a few metres away and I could see it up close … it still gives me shivers!

It has been a great privilege to be able to take part in research that will contribute to local conservation, but also the potential conservation of the species at a national level. In the long run, it’s people’s attachment to places and species that protects them. Our Landcare group members have spent 19 years working voluntarily on Latham’s snipe because they care.

• Relationships are the key – relationships between people, but also with the land and the species.

• People are interested in knowing what is going on. Informal communication in a community (chatting) and working with the local school can be more important than Facebook likes or media releases.

• Where possible, integrate the research with other activities – art, music, the local schools, habitat protection projects for other species.

• Make sure that any findings from research are understood and used as widely as possible. The findings can be applied in education, land planning, habitat protection and species protection.

Jodie Honan is a founding member of the South Beach Wetlands and Landcare Group.