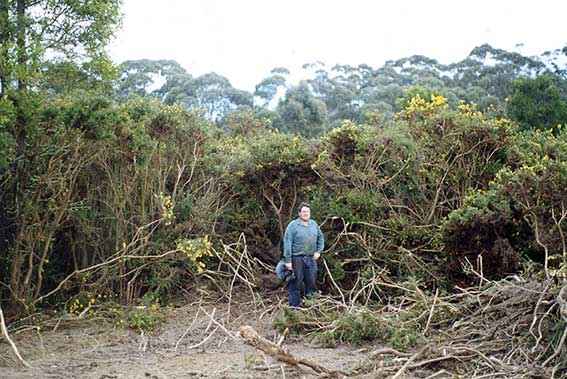 Above Landholder Stephen Guy at the start of gorse control works on his property at Staffordshire Reef.

Effective gorse control requires a sustained and long-term effort. The Victorian Gorse Taskforce (VGT) has been advocating for a community-led approach to managing gorse since 1999.

Effective gorse control requires a sustained and long-term effort. The Victorian Gorse Taskforce (VGT) has been advocating for a community-led approach to managing gorse since 1999.

The VGT method aims to encourage landholders to control their gorse through education rather than enforcement, creating ownership and inspiring a domino effect towards action when landholders see what their neighbours are achieving.

The VGT sources funding from across government to run a grants program to help communities get the ball rolling in managing gorse. The grants require a matching contribution of at least $1: $1. Participating landholders sign a three-year voluntary agreement to complete any necessary follow up control at their own expense.

Ashbourne Landcare Group (ALG), near Woodend, has received a number of grants from the VGT and made significant progress in gorse control. In 2015/16 VGT funding of $13,360 resulted in more than $66,000 worth of gorse eradication works being carried out by participating landholders.

According to Michael Peck from the ALG, being able to refer to the conditions of the voluntary landholder agreements has been effective at encouraging ALG members to keep up with gorse control in successive years.

“It’s important to prepare landholders for what their chosen control method will entail. We found that where possible spraying the gorse plants and then leaving them in place is the best method, as it will deny light to the seed bank, and prevent germination. Some landowners preferred to mulch or slash and they had to be prepared for vigorous regrowth in the following years and the need to spray large areas,” Michael said.

Jen Clarke from the Woady Yaloak Catchment Group said the landholder contribution of at least 50 per cent of the gorse control project creates a financial commitment and means they are motivated to do the follow up.

“The initial impact is always eye catching – seeing lots of dead gorse or spaces opened by mulching gives a sense of achievement. However, the critical thing is to maintain the momentum and commitment to the problem.

“In drier years the response to spraying is slower and can be less effective, which is to be expected because of plant stress. This can be discouraging and cause individuals to lose momentum so it is critical to foster community connections to others who are working on gorse, and provide on-going support.”

In for the long haul

According to Jen, landholders need to know that they are in for the long haul.

“For many people financial support will be required, as well as reminder/ongoing contact from the group and facilitator. We need to regularly check in with our target audience to see how they want their Landcare programs delivered, and adapt to change and stay relevant,” Jen said.

Jen stressed that ownership by landholders and a community-driven approach was crucial. “Our programs, not just with gorse, but in all aspects of Landcare, have always been community-led. We find the greatest impact and ownership comes when the landholders decide the priorities for themselves and their local landscape, and work within a supportive, community environment to achieve their goals.

“It also helps when the local community sees the impact that gorse control can have in their local area and new landholders join,” Jen said.

Brendan Smith from Tylden Landcare Group feels that VGT assistance provides credibility. “Many landholders were not aware of their responsibilities in regionally controlled weed management, did not have the funding, equipment and/or skills for weed management, and some were reluctant to use chemicals. VGT funding showed local landholders that it’s not just Tylden Landcare Group, but a Victoria wide program,” Brendan said.

Tylden Landcare Group utilised an EcoBlade that applied herbicide at the same time as slashing and found this to be a most effective manner of gorse treatment. Additionally, Brendan prepared a gorse management plan for each property, giving people something to refer to in future years.

ALG and Tylden Landcare Group held a field day for all participating landholders at the beginning of each year’s implementation, which created a sense of camaraderie. Where possible, half of each landholder’s funding was given upfront to further cement the commitment and allow them to begin their purchases.

In future they plan to expand the field day to better demonstrate the rabbit and fox control aspects of gorse control and harbour destruction.

Brendan felt that the effect on local landholders, although hard to measure, was the most sustainable outcome.

“Hectares of gorse control was achieved, but the bigger achievement was the introduction of some landholders to the idea that looking after their land is vital. Showing them that engaging with Landcare has benefits and raises the awareness that they are not alone in dealing with gorse,” Brendan said.

Heidi Snow is the Communications, Community Engagement and Extension Officer at the Victorian Gorse Taskforce.