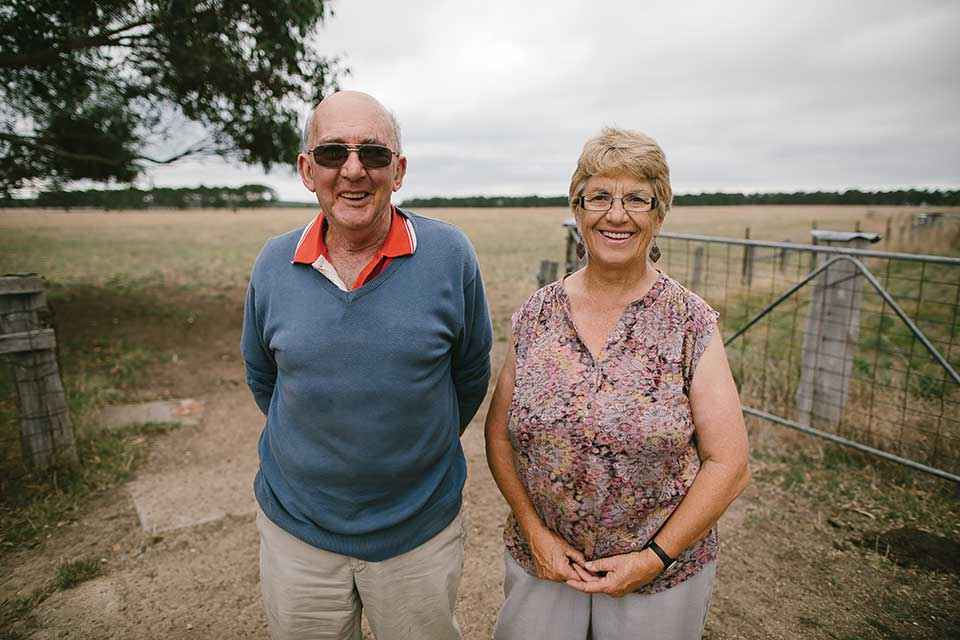 Above Longstanding members of the Merriman Creek Landcare Group, Peter and Norma Garlick participated in the study.

By Rachel Millar and Kathleen Brack

We know that Landcare groups make a difference to the natural environment. Groups use funding to plant trees, treat weeds, fence gullies and stabilise riverbanks. The benefits of these works are well known, well researched and are implemented using current best practice in natural resource management.

What has been more difficult to assess is the social impact of funding a Landcare group. How does the funding change how the group and the community around it connects and functions?

In 2017 the West Gippsland CMA, in partnership with the Merriman Creek Landcare Group and social research company Think Impact, set out to discover more.

The focus of the research project was to investigate how much social benefit (in dollar terms) would be derived from each dollar of investment from government funding.

A grant awarded to the Merriman Creek Landcare Group was used as the basis for the research. In 2015, the West Gippsland CMA received Victorian Government funding as part of the Regional Riparian Action Plan to support community works along waterways. Merriman Creek Landcare Group received $15,000 of this funding for on-ground work and project delivery.

The Merriman Creek Landcare Group operates in an area south of Sale in south-east Gippsland. The group follows Merriman Creek from its headwaters to its mouth at Seaspray. There are 33 mostly farmer members who meet several times a year at the Stradbroke Hall.

Works completed as part of the project grant included removing blackberries, putting up fencing to prevent stock access, and planting indigenous trees along the Merriman Creek.

After the funding was allocated, CMA staff started a Social Return on Investment (SROI) evaluation to assess the social value created by the project.

The focus of the research project was to investigate how much social benefit (in dollar terms) would be derived from each dollar of investment from government funding.

Social Return on Investment (SROI) is an internationally-recognised framework that identifies and accounts for social change experienced by key stakeholders by assigning monetary proxies to the change. Although the values are expressed in dollars, they do not equate to financial return.

Guided by this standardised process, we set out to discover what value this Landcare project had to the community. We did this by identifying and interviewing key stakeholders, in this case the Landcare group’s members, the residents and ratepayers group and the local water authority. From this initial discussion we developed an impact map, or theory of change, which shows the relationship between inputs, outputs and outcomes.

The next stage involved seeing whether our predicted outcomes had actually happened. We did this by interviewing stakeholders face-to-face or via survey.

Once we collected evidence on outcomes and monetised them, those aspects of change that would have happened anyway or were a result of other factors were eliminated from consideration.

We then calculated the SROI and were able to identify the greatest outcomes of the project.

One of the key challenges of the research was attaching a monetary value to social change.

Results stack up with Landcare group

One of the key challenges of the research was attaching a monetary value to social change. This is generally not well known and can be difficult to explain. However, when we checked the results with members of the Merriman Creek Landcare Group, they fully endorsed and agreed with the result.

By far the largest reported benefit was giving the group a sense of purpose and renewing enthusiasm as part of the project. One participant said, “without the funding the group would have continued to limp along without any enthusiasm.”

The work of managing the project meant members were brought together more regularly with something to talk about and work towards. Meetings were more exciting, dynamic and people actually wanted to attend them.

Improved emotional wellbeing generated the second most valuable outcome for all group members. The research revealed that 100 per cent of group members experienced greater emotional well-being from being part of a Landcare group. A participant said “there’s a lot going on in the world and being part of Landcare makes me feel less guilty. I feel good about doing my bit.”

Members also reported the project improved or strengthened their group skills in things such as project management and reporting, while others described how it increased their knowledge of environmental issues.

This knowledge didn’t just stop at the Landcare members’ fence lines either. We learnt that members often spoke to others in the community about their project.

The implications of this research are that the environment is not the only area that benefits from Landcare projects. Landcare projects also have significant advantages for the local community by increasing skills, emotional wellbeing and connection. The study showed that for every $1.00 granted to the group there was at least $3.41 return in social value.

We hope to use the results of this research in further funding applications. It’s also available to other Landcare groups and networks to use in their own grant applications.

Kathleen Brack is the Regional Landcare Program Officer at the West Gippsland CMA.


By Rachel Millar and Kathleen Brack