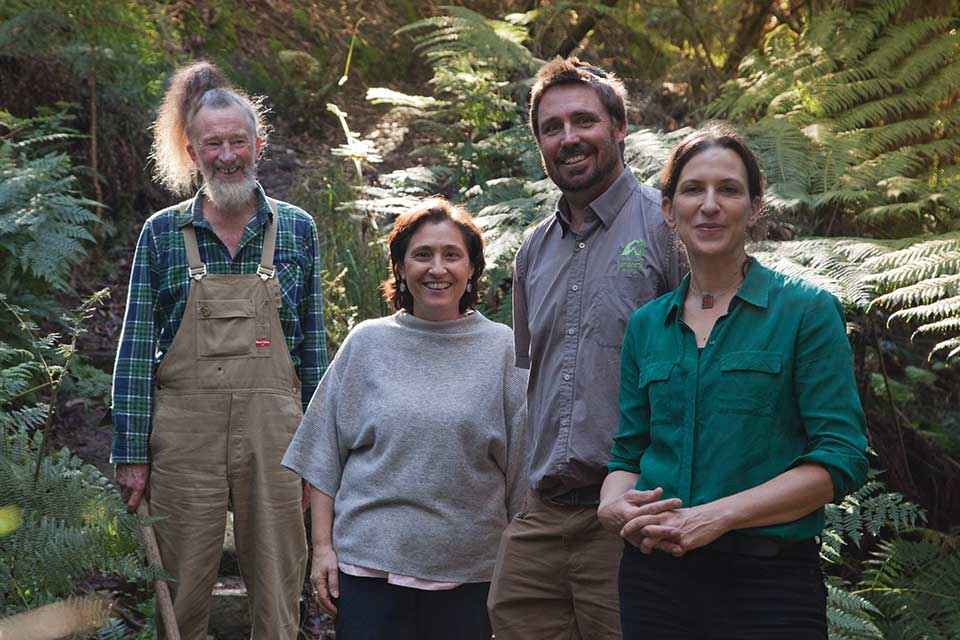 Above Paul Speirs, with Minister D’Ambrosio, Dave Bateman (Bass Coast Landcare Network), and Jordan Crugnale, Member for Bass, in the cool temperate rainforest that regenerated from plantings on Paul’s property 28 years ago.

While the benefits of a healthy environment to the natural world are widely recognised, there is a rapidly growing awareness that a thriving natural environment also sustains the health and wellbeing of people and communities.

Traditional Owners have long recognised the critical connection between Country and health, and now scientific research in Australia and internationally is revealing that nature-based solutions can help us address many of the health challenges we are facing.

In this issue of the magazine we look at the many positive ways in which Landcare impacts on health. You can read about research findings, farm safety advice and some heart-warming stories that demonstrate how the ‘care’ in Landcare is bringing people together and improving their social connections and sense of fulfillment.

The team from the University of Melbourne’s Beyond Bushfires study reports on their ten-year project to understand the experiences of people and communities after the Black Saturday fires in February 2009. The study focused on community, resilience and recovery, as well as observations around the health and wellbeing of individuals and communities in fire-affected areas across Victoria.

The Moorabool Catchment Landcare Group reports on the creative ways in which they are encouraging more people to connect with their natural environment to improve community health and wellbeing. A family day at Paddock Creek Reserve in Gordon centered on the Aboriginal history of the area, with cultural stories, poems and songs. The event was described as “magical”. The group also hosted Tai Chi and yoga classes at the reserve, with participants reporting they are likely to continue with the classes and were keen to be more involved in Landcare.

You can also read about forest therapy, which was first introduced in Japan in 1983. Since then, it has shown strong positive results for improving public health in those countries that have integrated it into their national health systems. Several dozen forest therapy guides are now being trained in Victoria, and programs are underway at the Royal Botanic Gardens in Melbourne, at Trentham, and through Brimbank Council.

In early May I had the pleasure of opening the 2019/20 Victorian Landcare Grants at Paul Speirs’ Archies Creek property, near Wonthaggi. Paul is a founding member of the Archies Creek Reforestation Group and he has worked cooperatively with neighbours to revegetate his property back to natural forest. It’s wonderful to see first hand how the Victorian Landcare Grants are supporting the protection and restoration of farmlands and landscapes across the state.

I wish you all good health over the winter season.