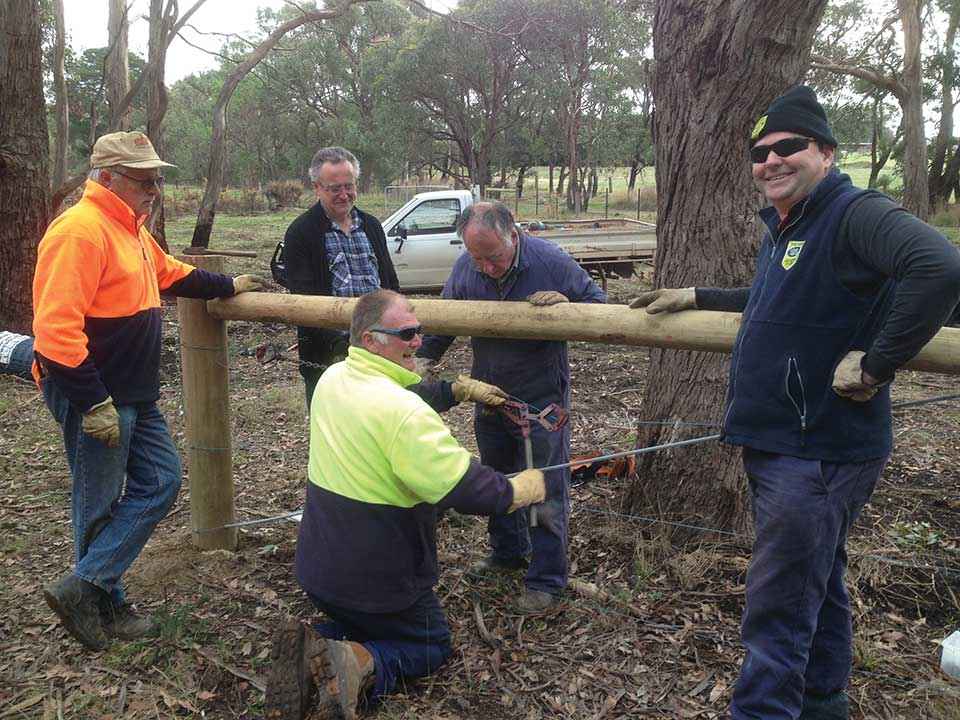 Above Volunteers from the Victorian Mobile Landcare Group and local Strath Creek fencing contractor Steve Joblin (kneeling) helping to fence a fire damaged property at Willowmavin in May 2014.

South West Goulburn Landcare Network (SWGLN) is an alliance between eight Landcare groups operating in the catchments running from the Great Dividing Range to the Goulburn River near Seymour.

We have been affected by two fire events since 2009 and our response to them has been very different.

With 450,000 hectares burnt, the Black Saturday fires on 7 February 2009 left a swathe of death and destruction and a community reeling in its wake. Sunday Creek Dry Creek Landcare Group obtained funding shortly after the fires to start critical works protecting waterways and dams with rice straw. Demonstration days were held to show how the rice straw should be placed to reduce debris and sediment washing into waterways. Approximately 16 months after the fires SWGLN obtained a large amount of funding to do the on-ground works needed.

A series of fire recovery workshops were held and various companies sent volunteers to assist with planting and fencing days. This helped the landholders impacted by the fire to get back to some sort of normalcy. Overall a large number of works were completed throughout the region with a positive outcome, but they had a very slow start.

Although all fire-affected landholders were eventually contacted, only 23 per cent responded and many were angry at the late offer of assistance. More than one person asked what had taken so long.

Some of our Landcare members produced detailed notes on the recovery process that were used locally but were forgotten over time.

Our next major emergency event was the Kilmore-Mickleham fires on 9 February 2014. More than 23,000 hectares were burnt along with 18 houses, many outbuildings and stock. Thankfully there was no loss of human life. The difference this time was a community determined to bounce back quickly and not be defined by the fire. By 13 February SWG Landcare had organised a meeting of all of the agencies involved in fire recovery.

SWG Landcare came up with strategies for what needed to be done to achieve better outcomes. These included working with the neighbouring Upper Deep Creek Landcare Network and natural resource management agencies to take landholders through the various steps for rebuilding in an organised manner. An 18-month program of information sessions, workshops and field days commenced within weeks of the fire.

SWG Landcare quickly updated its Landcare notes with information on the situation and then Victorian Landcare Program staff from DELWP loaded them on to the Landcare Gateway for open access. All of the groups in the alliance were able to add their logos and include critical local information for landholders. Having targeted, relevant and practical notes for landholders was an important part of the recovery process.

• Be on ground as soon as possible and when safe to do so, to provide critical community support and assistance.

• An expression of interest form sent by mail was an effective way of making contact with people affected by the fire.

• Promise only what you can deliver. We stated up front we had no money for works but wanted to find out what people needed in order to seek appropriate funding.

• Work with the other natural resource management agencies and your neighbouring Landcare Networks – know who is doing what.

• Take the time to listen to people. People need to tell their story.

• Collaboration is the key – we are all on a journey with the community together.

Read next article: PPS farmers respond to bushfire affected peers near and far