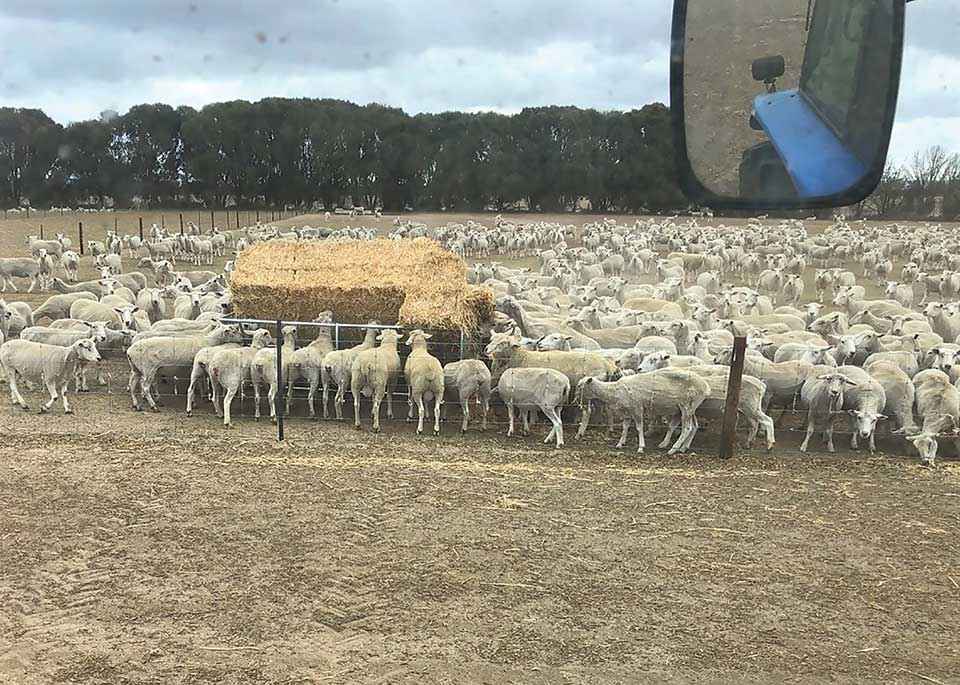 Above Hungry sheep on Kangaroo Island rush to feed on hay donated by PPS members in Victoria’s Wimmera region.

Perennial Pasture Systems (PPS), an independent farmer group in the Project Platypus Landcare Network’s area in the Upper Wimmera catchment, was quick to respond and assist fellow farmers affected by the 2019/20 summer bushfires in Victoria and South Australia.

PPS initially joined farmers in the Tatyoon district who coordinated the first hay drive to affected areas with hay and straw. The initial donations went to East Gippsland and PPS organised more loads later in the summer.

Many PPS members understood the hardship endured by East Gippsland farmers as several had visited the region on the group’s annual study tour in 2018. Having seen the impact of the prolonged drought in the region, many expected even the most resilient farmers to be tested by the fires.

PPS were pleased to be able to assist the recovery effort by sending fodder to affected farmers. As well as using volunteer trucks, PPS assisted local businesses that struggled after the fires by choosing to utilise Gippsland contractors.

A fire in the Lexton area, where most PPS members are more closely located, caused huge problems for local farmers. The members delivered hay and grain to impacted farms after the fire to assist in the management of stock.

Assistance was also given to farms on Kangaroo Island where more than half the island was severely affected by fire. PPS members had visited Kangaroo Island on the 2017 study tour. Several of the farms visited lost stock, fences and infrastructure in the fires. PPS delivered loads of straw to the study tour host farms and other properties affected by the fires, with the fodder going to sheep in containment areas.

While I managed most of the recovery process, many members put in hours of voluntary time to assist with the effort. Stuart Robinson from Lismore coordinated the Kangaroo Island fodder with assistance from Jason Benson’s freight business, who donated his trucking service for the hay delivery. Corey Price from Eversley also organised five semitrailers to deliver donated hay for the second Gippsland effort in February 2020.

PPS members also donated funds to assist with the transport of fencing material for farms on Kangaroo Island, offset fuel costs and help support a local Lions Club near Lexton who catered for the bushfire recovery crew, BlazeAid.