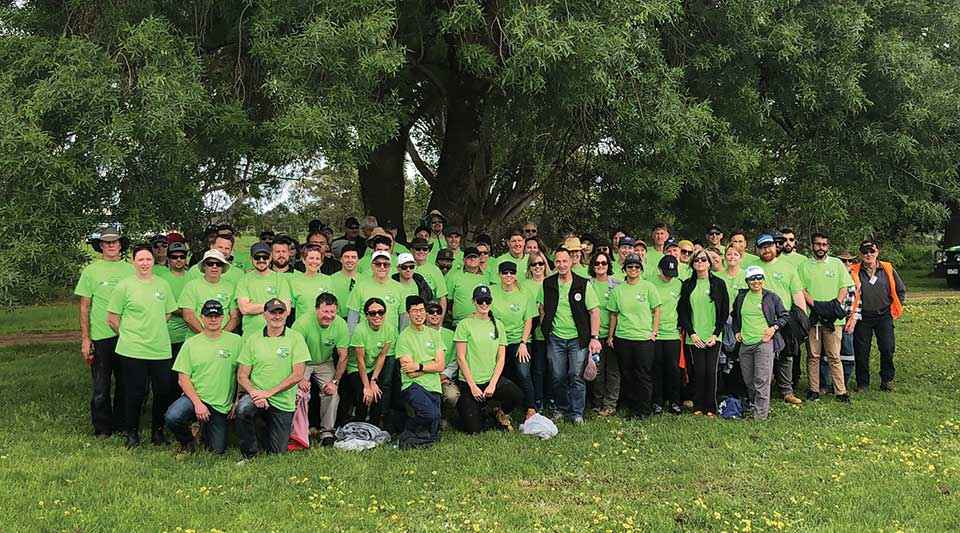 Above Staff from Deakin University and other volunteers working at the ReGreen4FireAid event at Lake Cobrico.

On St Patrick’s Day (17 March) 2018 four major fires in Terang, Gazette, Garvoc and Camperdown burnt more than 24,000 hectares of Victoria’s South West. The fires primarily affected farmers with more than 90 per cent of the fire footprint on private land.

According to the 2018 South West Fires Community Report, the fires destroyed 26 residences, 66 outbuildings and nearly 3000 livestock. Fortunately, there were no human deaths or serious injuries. In the hours and days immediately following the fires there was a sense of chaos and disorder that was also felt at Heytesbury District Landcare Network.

The CFA, Victoria Police and other government agencies including DELWP, the CMAs, Environment Protection Authority, Parks Victoria and Forest Fire Management Victoria all have defined roles in the response and recovery phases of a fire event. This is not the case with community-based Landcare groups and networks. Each network responds in an entirely different manner as there is no script or policy that applies for Landcare in a post-fire period.

Each fire emergency is unique

Some of us at the Heytesbury District Landcare Network have had direct experience with fighting fires, including as CFA volunteers or Parks Victoria employees. For others it was their first fire. Irrespective of experience, each fire emergency triggers a set of responses that are unique to the setting and circumstances that exist at the time. What is common with all fire events is they draw attention to the crisis at hand and business-as-usual activities recede into the background.

Our first response as a network was to venture into the landscape to see how landholders were impacted and to make calls to check in on people. We encountered a devastated landscape. Seeing people pick through the remains of their burnt-out properties was tragic to behold.

Downed electricity poles were still smouldering days later and in the absence of boundary fencing stock were wandering freely across roads and from paddock to paddock. Three days after the fire struck various agencies had already attended many properties to deal with stock that were beyond saving and BlazeAid had established a centre at Cobden to install fencing.

Several Landcare staff in our region have had recent experience with fire-affected communities. Nick McKinley was involved in the Leigh Catchment Group’s response to the 2015 Scotsburn fires and Libby Riches was involved with the Southern Otway Landcare Network during and after the 2015 Wye River-Jamieson Track fire. We called Nick and Libby to ask how we could respond to the fires as effectively as possible. Further discussions with John Robinson (see John’s article on pages 8–11 about his experience after the 2014 Mickleham fires), Ross Martin from DELWP and Nerissa Lovric from Agriculture Victoria led us to the idea of applying the collaborative model adopted by our network for projects.

We learned from our enquiries that the recovery effort post-fire can be complex depending upon the varying capacity of land managers to engage in the process of restoring the landscape.

In the weeks after the fire the sense of chaos and uncertainty in the farming community and townships increased. Stories were emerging of distressed, fire-impacted landholders encountering up to 10 phone calls or visits in one day in the response and recovery effort.

The network offered to take the lead in a more collaborative approach – encouraging providers to work across organisational and geographic boundaries for the benefits of landholders. We invited government agencies to join us in multi-purpose team site visits. This model led to some fantastic outcomes, including securing funding through the CFA’s Safer Together program to run a series of workshops, community gatherings and planning sessions for the mutual benefit of fire impacted landholders and others in the community.

The Corangamite CMA partnered with us to deliver riparian fire recovery projects and we secured significant support from DELWP’s Community and Volunteer Action Grants and emergency funding for on-ground works through a Victorian State Government Treasurer’s Advance.

Landcare was also represented on the DELWP-led Natural and Built Environment Recovery Pillar, the appointed multi-agency group coordinating the natural resource management aspect of the fire recovery effort. We reported in on our on-ground activities alongside local and state government agencies.

A dedicated Fire Recovery Officer role was created at the Heytesbury District Landcare Network, leading to the employment of Paul Hartrick. Our other staff members Lyndell Driscoll and Jeremy Pike pitched in to assist with community activities. Everyone involved in the network has been heartened by the extraordinary capacity of people to work together in a crisis.

Barbara Cowley was one of a number of landholders adjacent to the peat fire at Lake Cobrico near Cobden who were evacuated for several weeks due to the threat of carbon monoxide poisoning and the inhalation of small particulate matter. Despite this Barb was instrumental in setting up a donation system through the Uniting Church to receive contributions for those affected by the fires.

The network-led collaborative team met with other landholders bordering the peat swamp and were able to achieve a swifter result for them in responding to the fire impacts.

The community-based ReGreen4FireAid group, including more than 90 staff from Deakin University’s Warrnambool campus, held a working bee on the farm of John and Joy Errey at Lake Cobrico seven months after the fire struck. The group planted trees, built fences and put together fire donation kits for other landholders. It was a great example of a community working together.