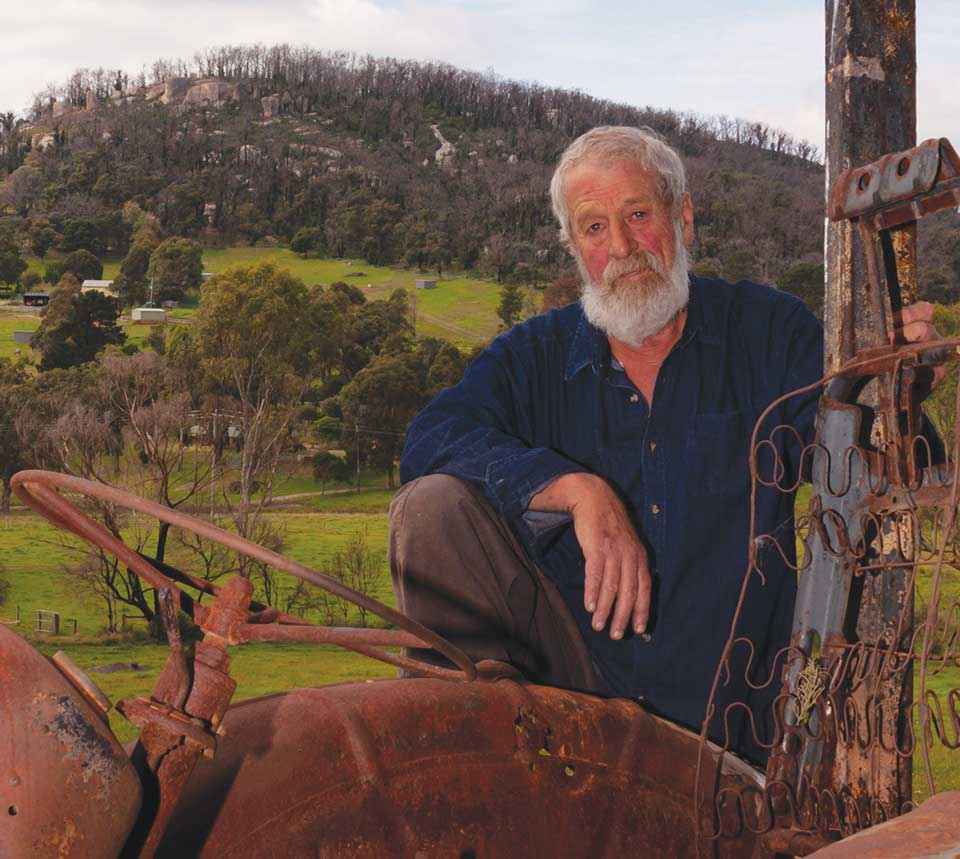 Above Garry Burns with his burnt-out tractor at Garfield North. The view behind him is of Mt Cannibal where some severe hot spots will need planting out. The community rallied around Garry after the fire and helped him to carry on.

In March 2019 the Bunyip complex bushfire consumed 15,000 hectares of Bunyip State Park and properties south of the park from Tynong North in the west through to Tonimbuk in the east.

Pam Cunningham, Secretary of the Cannibal Creek Catchment Landcare Group (CCCLG), coordinated the first working bees while the fires were still smouldering. In the year since the fires, which impacted 300 properties around her home at Cannibal Creek near the foot of Mt Cannibal, Pam put the call out to volunteer groups to clean up fence lines, chainsaw felled trees, replant vegetation and construct deer fencing to protect remnant vegetation.

Using well-established community networks, Pam has coordinated more than 200 volunteers who contributed 1300 hours to help her community recover. Like many of her fellow volunteers, Pam is caring, eager and has extraordinary organisational abilities.

Fellow resident Garry Burns saved his home from the fire but lost his machinery shed, hay shed, fencing and cattle run. A committed community volunteer involved in the local Cannibal Creek Reserve Committee, Friends of Mt Cannibal and CCCLG, Gary found himself struggling to cope with the emotions of anger and frustration at the loss. The turning point came when Pam Cunningham arranged 45 volunteers including the Western Port Intrepid Landcare Group to help Garry’s family clear up the paddocks.

Recovery groups a voice for community

Garry is now a member of the local community recovery committee – a group of fire-affected residents who act as an important voice for the wider community. Armed with his understanding of how the community, standing side by side, helped him to cope physically and emotionally, Garry coordinated a planting day to revegetate the historic Garfield North Outdoor Education Centre.

The nectar feeder garden planting day was widely supported by local organisations including Western Port Landcare Catchment Network, CCCLG and Cardinia Shire Council. The day brought more than 100 volunteers and community members together to revegetate the land in a symbolic gesture of recovery and regrowth. The day was nominated for Cardinia Shire’s event of the year.

Marianne Sawyer, Cardinia Shire’s Biodiversity Officer and Vice President of the Yarra Valley Equestrian Landcare Group, was one of the volunteers that answered Pam’s call to help clean up Garry’s property. While helping, Marianne recognised many landowners lacked the knowledge needed to help their land recover from the fires. Marianne used her networks to pull together a group of experts from both government and volunteer organisations to facilitate a coordinated approach to community information and resources.

Involvement on the subcommittee by grass roots volunteer groups such as CCCLG and Bunyip Landcare Group (BLG) had enabled them to secure funding from DELWP under the Biodiversity Response Planning process to allow the Cardinia Creek Catchment Biodiversity Project to continue with weed control, pest animal control, revegetation and fencing over the next 18 months.

Sue Anderson from BLG is an active member of the subcommittee. Sue has championed research into shelterbelt design to reduce bushfire risk and trials of cultural burning. Sue also supported her husband, John Anderson, in coordinating a BlazeAid camp at Bunyip.

John worked tirelessly, often up to 14 hours a day, seven days a week to manage and coordinate 600 BlazeAid volunteers over five months. The volunteers assisted more than 170 landholders clean up 300 kilometres of burnt fencing wire and reinstate 130 kilometres of fencing on fire-affected properties.

Jim Armstrong from Labertouche Landcare Group was another community member who gave his all to fire recovery. Jim worked on 10 local properties for 10 months using his tractor to shift burnt timber, remove wire and clear fence lines. Jim also organised a dozen volunteers from Labertouche Men’s Shed to build wildlife nest boxes, letterboxes and even a carport for a local in need.

The fire was and continues to be devastating for many. It has had an emotional impact that will linger. The recovery work and local community involvement will continue for the next 12-18 months and beyond, as needed.

Resilience can be hard to find after such an overwhelming emergency, but our community has demonstrated it in spades.

Through working together to support each other there is hope that both properties and the local environment will recover.