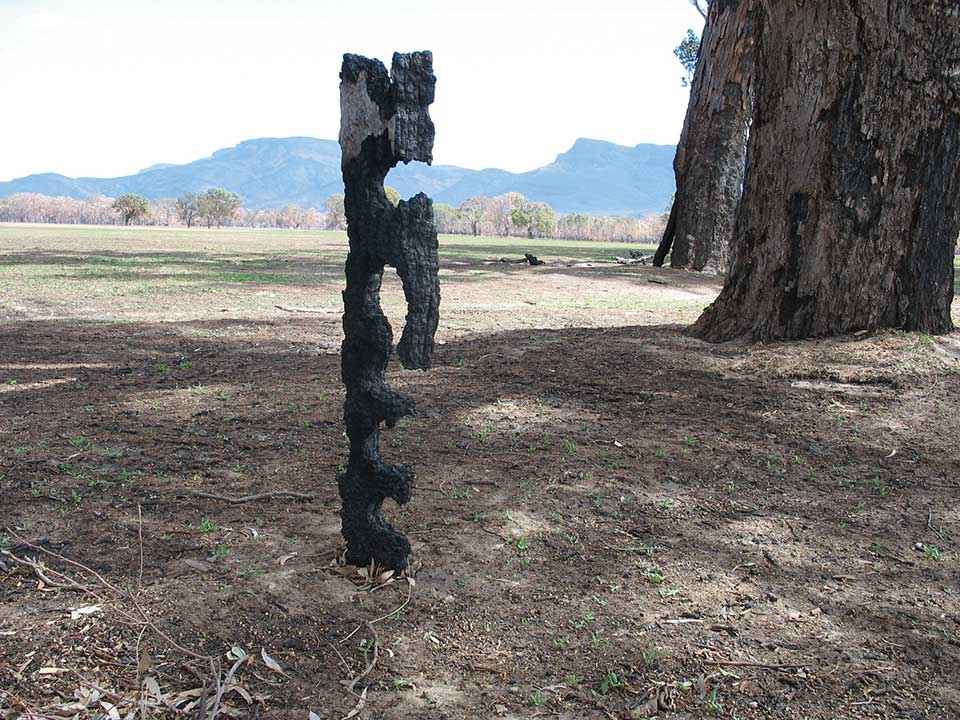 Above A burnt fence post on the property Teran Park at Jallukar after the 2006 Mt Lubra fires shows the severity of the fire damage. Landmate crews have experience at both removing and re-installing fences after fire.

Prisoners from the Landmate Environment Program have supported local farmers for many years. Crews of up to nine prisoners have been specifically trained to provide recovery works and restore the environment after natural disasters.

Neil Marriott from Black Range Landcare Group near Great Western called on the Landmate crew from Ararat Prison after his property was impacted by bushfire in 2005.

The fire started on the morning of 31 December 2005 at nearby Deep Lead. Neil and his wife Wendy’s two children were visiting for Christmas. They spent the day practising their drills and teaching them how to prepare for a bushfire, filling tanks, testing sprinklers and fuelling up the generator. Neil and Wendy were confident that the north wind would send the fire past the whole Black Range, so they settled down to their New Year’s Eve dinner.

“We were sitting down to relax when the wind suddenly turned to the south west and the fire front, which had been a narrow finger heading well to our west, immediately widened. We were shocked to see a massive glow crowning the top of the Black Range,” Neil said.

Within minutes the whole property was igniting as spot fires began in all directions. The family of four spent the night fighting to save the house, nursery and sheds. The CFA were busy building firebreaks to protect Stawell. They arrived to assist at 1am and by 4am the fire front had passed.

Neil explains that while the house was saved all of the rabbit-proof boundary fencing which spanned several kilometres was destroyed along with most of the gardens which were used for seeds and cuttings for the nursery, as well as a thriving cut flower plantation.

“Worst of all for the wildlife was the loss of all our big old hollow trees; these were used extensively by a host of birds, possums and sugar gliders. As the property recovered, green shoots were rapidly eaten out by incursions of rabbits. It was essential to rebuild the fencing as soon as possible. This was years before BlazeAid so we waited in limbo for the insurance assessors to come and make decisions,” Neil said.

Neil and Wendy have a conservation covenant on the property. They were supported by Trust for Nature, Greening Australia and Project Platypus. The Northern Grampians Shire Recovery and Grampians Wimmera Mallee Water were also helpful.

“It’s a bit of a blur who did what. We were supplied with nest boxes by the Nhill Men’s Shed and the Hopkins Correctional Centre Landmate program crews from Ararat removed and rolled up the kilometres of fencing and wire damaged in the fire. The burnt out and fallen trees along the boundary were also piled up ready for winter burning. It would have been months of work for us.

“Within weeks our neighbour had helped with the installation of new corner and strainer posts, and then the Landmate crew erected brand new rabbit-proof fencing. It took a while, but I truly don’t know how we could’ve got back on our feet without the mighty help of the wonderful Landmate crews,” Neil said.

Terry and Annette May from Jallukar Landcare Group also had a positive experience with Landmate after the 2006 Mt Lubra fire burnt 90 per cent of their property with the loss of many kilometres of fencing.

“Landmate became an important cog in cleaning up damaged fences and building new ones. They were here for many days over the next couple of years. We found them efficient and excellent workers with a good work ethic. They gave us inspiration to keep going and to rebuild,” Terry said.