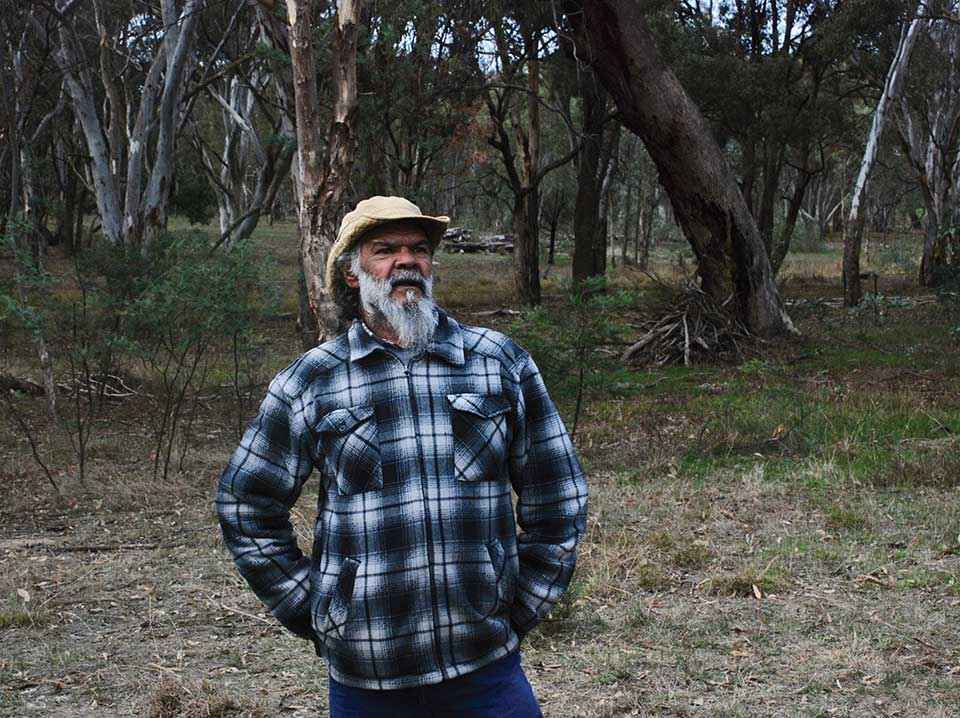 Above Ngarigo Elder Uncle Rod Mason shared his knowledge of cultural burning at a workshop run by the Wooragee Landcare Group in autumn 2019.

Aboriginal mosaic burning once patterned the entire continent, as intricate and connected as the scales on a crocodile’s back or the feathers on an eagle’s wing.

The first Australians did not fear fire like we do, instead they learnt from childhood how to master it.

I believe it’s time for us to replace our fear of fire with a more thorough and nuanced understanding, including how local topography, climate and different vegetation types will affect the fire regimes delivered. We need to put aside the prejudice of the past towards Indigenous knowledge and collaborate with our neighbours in trickle burning our forests and vegetation.

Repetitive pattern work is integral to Indigenous design whether in a dot painting, clan symbolism or digging yam daisies. Fire is no different. Large scale ‘hazard’ burning is antithetical to the Aboriginal approach of building a mosaic pattern, slowly and incrementally, until eventually a whole landscape has been burnt and remade.

At an Aboriginal-style cultural burn organised by the Wooragee Landcare Group in autumn 2019 a group of 30 participants prepared a patch of grass and weeds for firing.

The workshop was under the direction of Uncle Rod Mason, a Ngarigo Elder from the high country, who had studied with a firestick in his hand from a young age. Uncle Rod relishes fire as an agent of renewal: “You got to fire it! When you burn Country, it makes it brand new fresh,” he said.

Under Uncle Rod’s gaze, we built small pyres of leaves and twigs. When these were regularly spaced throughout the patch to his satisfaction, Uncle Rod tested wind direction and advised us to trickle burn backwards into the wind.

Lighting the first pyre, Uncle Rod stood in the centre directing traffic. He’d wave an arm: “Light more fires over there!” When the fire crept over a marked boundary, he’d send a group to beat it back. He lay on the ground so he could feel wind flows and predicted from cloud patterns that we could expect a wind change that evening.

The pyres burnt low and slow into each other. A cloud of moist white smoke rose and enveloped us. It was a wonderfully gentle process accompanied by much laughter, chatter and no fear.

Workshop participants discussed the need for a fire master’s course where people could be trained to use fire proactively to prevent wildfires as well as to optimise our nation’s biodiversity. Ideally the course would incorporate the best of both worlds – Indigenous traditional knowledge on mosaic burning combined with the results of evidence-based scientific research on fire’s impact on native flora and fauna in differing ecotypes.

This is underway in the widescale burning of the northern savannah across Arnhem Land where Indigenous traditional knowledge has been integrated with the techniques of western science. Indigenous ranger programs describe this hybrid as a ‘both ways’ approach.

It is critical that we do not take over from Aboriginal people or speak for them when adapting their traditional knowledge of fire.

According to Yorta Yorta woman and environmental scientist, Minda Murray, self-determination is at stake.

“Cultural burning is done by our mob not only as a physical practice, it is deeply entwined in culture and Aboriginal lore. Aboriginal people should always remain at the forefront of protecting our culture and our land – that’s part of self-determination,” Minda said.

There are a number of complex issues that need to be considered before cultural burning can be rolled out more widely. There has been a lack of monitoring of the impact of cultural burns and western fire reduction burns on vegetation and wildlife. More research is needed. There are also issues around identifying Aboriginal people with knowledge of cultural burning and how the next generation is trained. Poor training could lead to further devastation of land and wildlife.

Who burns and speaks for Country?

Richard McTernan, the coordinator of the Wooragee Landcare Group, has worked extensively with Traditional Owners in north-east Victoria and facilitated 10 fire workshops led by them.

“Burning Country is not learnt overnight and I believe local knowledge of the environment is essential,” Richard said.

There are questions regarding who has the right to speak for Country and who has the cultural fire knowledge for that Country. Respect for Aboriginal leadership is critical. Although Uncle Rod is a ceremonial fire man he argues that it is his peers – other elders from each local language group – that determine his right to teach and burn in their Country.

Training of new practitioners could provide another culturally appropriate employment pathway for Aboriginal people. At the Wooragee cultural burn, a young Wiradjuri man, Dean Heta, spoke passionately about the wish of many of his peers to get back on their land, managing Country.

“It’s about connecting Aboriginal people back to their cultural identity,” Dean said.

The desire to protect biodiversity and to live safely in the landscape is front of mind for all Australians. It’s time to stop and listen to the locals – to learn from their 65,000 years of land management experience before we arrived.

Gib Wettenhall is an author, publisher and farm forester from Mollongghip, near Ballarat.

Read next article: Drought Employment Program a win for the community and the environment