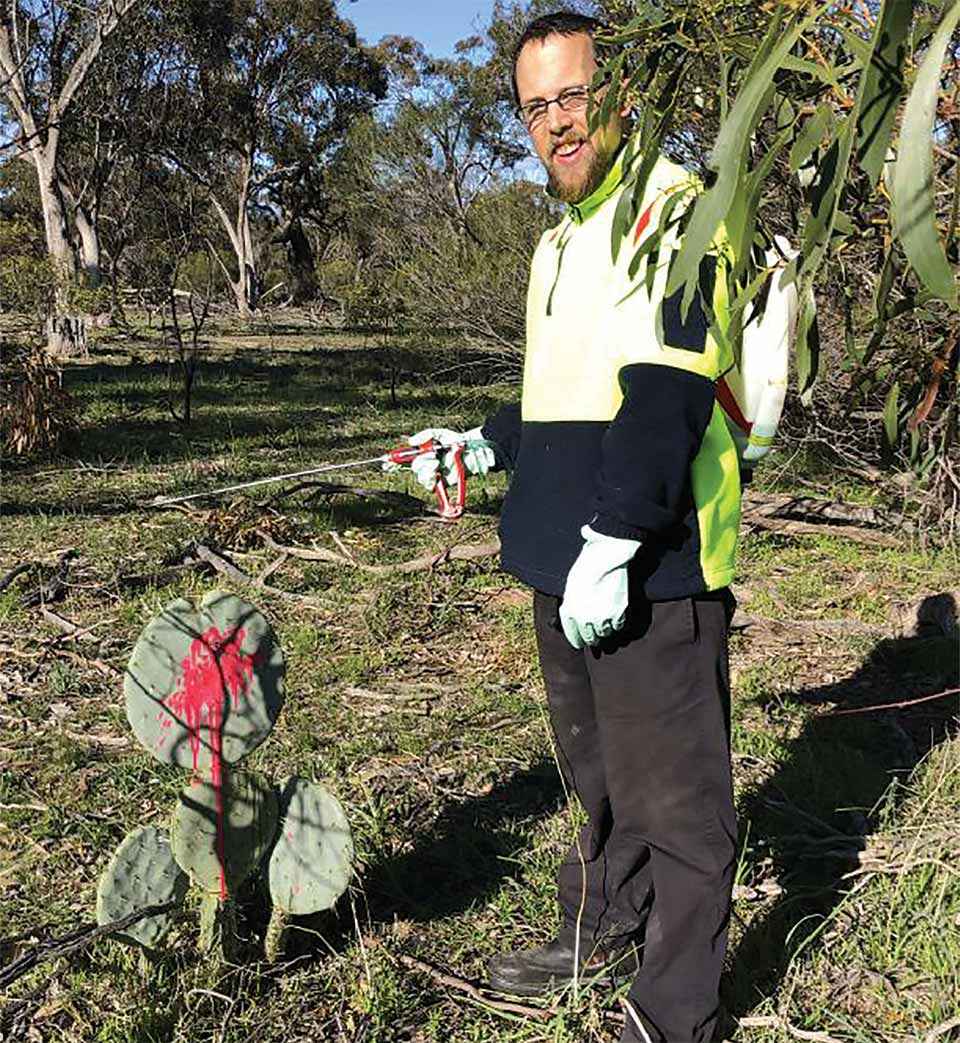 Above MKEW volunteer Lachlan Peters at a cactus control working bee in 2020.

Mt Korong Eco-Watch (MKEW) is a group of 20 landholders and community members who come together to support the biodiversity of Mt Korong and surrounding country in north central Victoria.

Wheel cactus (Opuntia robusta) and to a lesser degree prickly pear (Opuntia stricta) had been encroaching on large areas of public and private land across Loddon Shire, spread largely by parrots eating their fruits. In 2018, MKEW decided to institute a regime of cactus control at Mt Korong before the infestation grew to uncontrollable levels.

As we are a small group of mainly older members, we took a systematic, persistent control approach. The target area was broken up into clearly marked chunks that could be covered by a handful of volunteers during a three-hour working bee. The cacti are stabbed in each outer lobe with an injection of herbicide (transported in a backpack) using a specially adapted sheep-drenching gun. The working bees were held from 9am until noon on the same day as our monthly meetings.

MKEW obtained permission from farmers adjoining Mt Korong and Parks Victoria before starting work in August 2018. Parks Victoria Ranger Nic Van Den Bronk joined us for our first working bee and a local farmer donated a drum of herbicide after we treated his cacti. Our injecting gear is borrowed from the Loddon Plains Landcare Network.

After our initial working bee in 2018 we had three in 2019 and three in 2020. Between three and 10 workers turn up and we usually manage to cover the day’s target area. Participants walk in line-search style, with one person marking our leading edge using GPS tracking. That way we can document the extent of areas treated.

Cacti are injected, photographed, mapped, and marked with spray paint as we go.  Slopes are tackled in stages by placing people up the slope at 10-20 metre intervals and following contours, rather than participants climbing straight up and down repeatedly, which is exhausting.

Our map shows that at least one more working bee is needed before we have completed a full sweep of the whole of Mt Korong Nature Conservation Reserve. The steep, southern slopes of the mount are generally too moist and sunless for cacti, so will probably not require treatment.

The next stage of the project will be to begin retracing our steps with hoes and buckets to pick up any cacti germinants and to treat any mature cacti that may have been missed.

The group is proud of its efforts to rid Mt Korong of wheel cactus and prickly pear. It’s great to see these weeds eradicated from this beautiful landscape.

Some tips for cactus control

• Strike early before the job is too big.

• Concentrate on the area your group takes responsibility for and do the job gradually, in manageable chunks.

• Don’t worry about low numbers in your group. Even a few people can achieve a lot.

• Encourage young family members to come along and join in.

• Treat the project as a fun social occasion and great exercise.

Kate Lee is Secretary of MKEW.

Read next article: An early strike at tree dahlia in the southern Otways