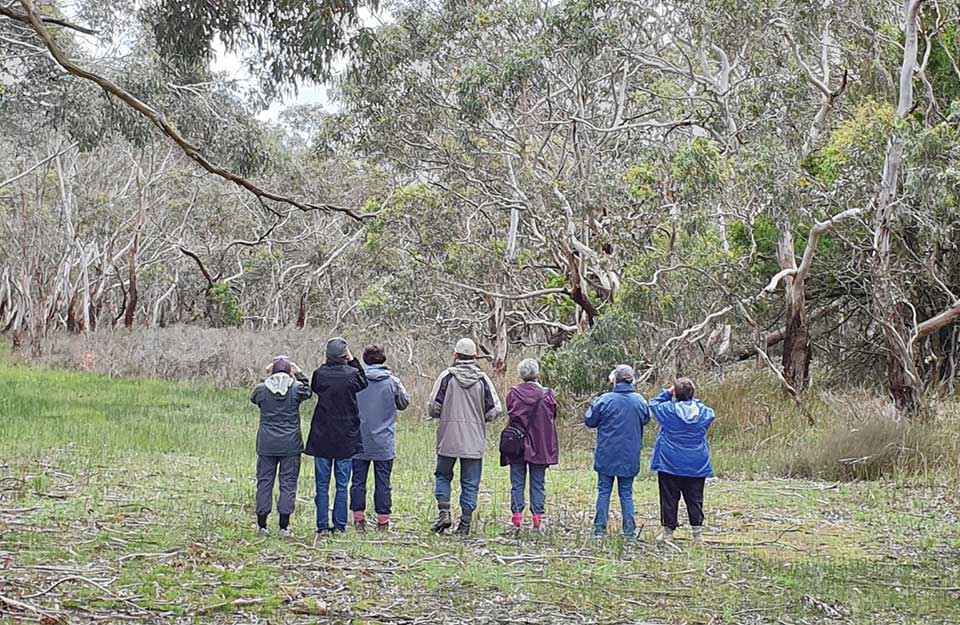 Above A BirdLife Warrnambool excursion to St Helens Flora Reserve in 2019. The fox control program is helping to protect local biodiversity.

Canid Pest Ejectors (CPEs) were first developed in the US in the 1930s as a spring activated device for the control of coyotes. The ejectors are staked in the ground and topped with a meat bait. The firm upward motion of a canid grasping the bait releases a sealed capsule of 1080 or PAPP into the mouth of the animal.

In 2018 Basalt to Bay Landcare Network (BBLN) approached Parks Victoria to secure a permit to use CPEs in the St Helens Flora Reserve inland from Yambuk.

BBLN aimed to reduce fox pressure on southern brown bandicoots by reducing numbers of foxes all year round.

CPEs can be used in winter when the reserve soil is sodden. They are easy to use, are reusable, have a very low risk of off target kill, are used with a remote camera to record visits from predator and prey, and enable accurate record keeping of fox kills.

We began the program in October 2018. Between seven and 12 CPEs are set around the perimeter and along the internal tracks of the reserve with a remote camera on at least one CPE every month.

The CPEs have been very successful. Foxes do not learn to evade the CPEs and there is no sub-lethal dose or caching of baits – a strong consideration in a farming district when the neighbours all have working dogs. At one CPE we filmed I checked the site every six days and we removed four juvenile foxes over one month. One CPE with an unchanged meat bait attracted possums, wallabies, birds and reptiles but remained untriggered until a fox activated it after three months. No buried bait would survive that long.

Overall, we are averaging one dead fox per fortnight. As the reserve provides the best vegetation cover in the area new foxes keep arriving so we plan to continue the program for as long as funding allows.

We have learnt to avoid placing the devices in dense vegetation as rodents, including native species, like to chew off the meat lure. If a CPE isn’t triggered for six weeks, it is moved.

Placing CPEs on the edges of the reserve’s tracks work best because this is where foxes tend to hunt and travel. A droplet trail of fish oil along the track leading to the lure helps direct the highly sensitive nose of any fox passing by.

The program has had multiple benefits for wildlife. We’ve been able to detect feral cats on our remote sensing cameras as they are also attracted to the lures. There has been an increase in ground nesting bird species in the reserve and on adjoining farmland and we are seeing evidence of bandicoots in new locations in the Reserve.

Read next article: Progress and change at Landcare Victoria Incorporated