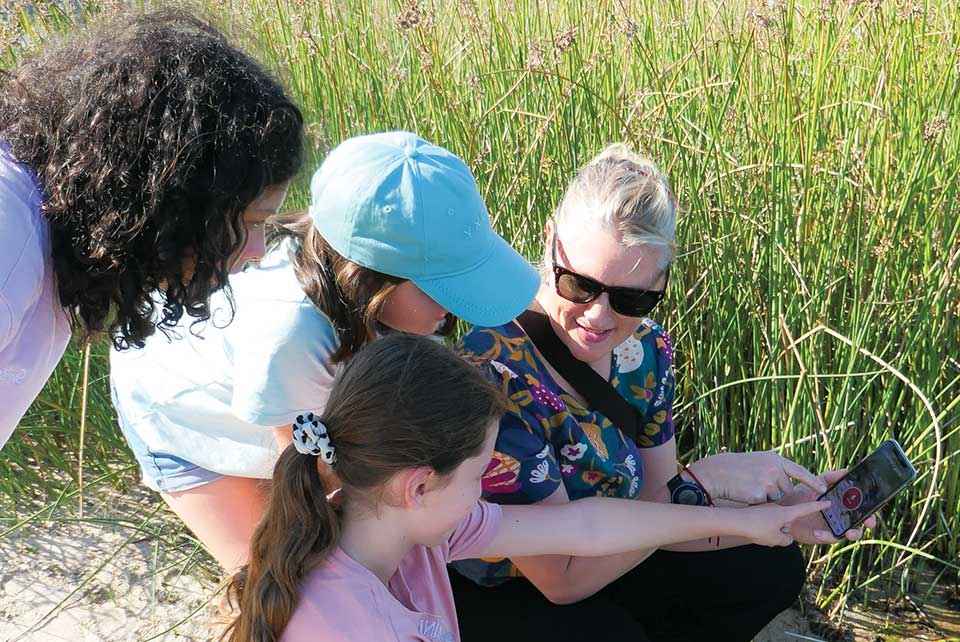 Above Local residents taking part in the Frog Census at Karkarook Park, Moorabbin, in March 2022.

It’s a humid summer evening at the edge of the Merri Creek on Wurundjeri Country. The sun descends across the volcanic plains and the black crickets begin their nightly chirping chorus. When darkness falls the night sky is scattered with luminous stars. You stand quietly, listening for the deep, gruff call of the endangered growling grass frogs, affectionately known as growlers.

Gone Growling is a citizen science program led by the Arthur Rylah Institute for Environmental Research (ARI) in partnership with Melbourne Water and DELWP’s Melbourne Strategic Assessment Program. Gone Growling builds on 20 years of research, led by ecologists Geoff Heard and Peter Robertson, to further our understanding of growling grass frogs in the northern urban growth corridors of Melbourne.

Growlers are a bright to olive-green with a warty back. The distinctive call of the male is heard during both the day and night during warm conditions between September and March. The frogs prefer wetlands with dense submerged vegetation for protecting tadpoles, rock piles to find shelter, warm, unshaded water and floating plants where males can call from and safely bask during the day, with adjacent open grassy areas for foraging.

Habitat loss for an urban frog

Growlers were once widespread across Victoria. They have become less common since 1990 due to habitat loss and fragmentation and a deadly fungal disease, chytridiomycosis.

They were listed as endangered in Victoria in 2002.

Growlers have been surveyed every five years at study sites in Melbourne’s northern waterways to track population trends. This year, a team of ecologists led by Geoff Heard and Peter Robertson, have been repeating these surveys in collaboration with ARI. Over spring and summer 2021-22, citizen scientists have also been adding to our knowledge of growlers by using their smartphones to record calls in local waterways.

The recordings are captured with the Melbourne Water Frog Census app. The app allows volunteers to collect data, which informs Melbourne Water on how we can better manage frog populations and raise awareness of waterway health issues. A frog ecologist listens to every recording submitted through the app and notifies volunteers if they have recorded a growler or other frog species.

Gone Growling kicked off its first season when Melbourne was experiencing COVID-19 restrictions. Despite this, 340 people downloaded the Frog Census app during spring 2021 and recorded growlers from 15 locations across Greater Melbourne, with nine records in the Merri Creek and Moonee Ponds Creek catchments.

These important records help to inform the scientific surveys undertaken by ARI and the survey team. Over spring and summer of 2021-22, 179 sites were surveyed across the northern fringes of Melbourne. Growlers were recorded at 36 of those sites, or 20 per cent. These records demonstrate a significant decline of growlers since the first surveys were done in this area 20 years ago.

Increasing urbanisation leading to further loss, degradation, and fragmentation of remaining habitat are to blame. Compounding this is the cooler and wetter conditions associated with two consecutive La Nina years. This has led to higher water flows in creeks. Growlers prefer slow-flowing water and pools for breeding. The cooler, wetter conditions can also exacerbate chytridiomycosis.

The Frog Census records and scientific survey results are being collated into an online interactive map that will help us to better understand how growlers are faring as urban development continues.

With the aim of protecting biodiversity during urban development for the long term, DELWP’s Melbourne Strategic Assessment program is creating 90 purpose-built wetlands in growling grass frog conservation areas along waterways in Melbourne’s four main urban growth corridors over the next 20 years.

Residents who live close to these wetlands as they are built in the coming years are encouraged to join the Gone Growling project. This will help scientists understand if the wetlands are working and providing much needed habitat for the species.

Construction of the first wetland began in 2019 at Rockbank North to the west of Melbourne. By spring 2020, growlers were found in the new wetland, most likely moving in from nearby Kororoit Creek. They have now bred at the site with 15 young frogs recorded so far.

To sign up to Gone Growling visit www.melbournewater.com.au and search for Frog Census.

Christina Renowden is the Victoria Nature Festival Coordinator and Citizen Science Advocate for ARI at DELWP.

With thanks to Daniel Gilmore for permission to use his images taken at Rockbank North.

To get involved with Gone Growling download the app from melbournewater.com.au