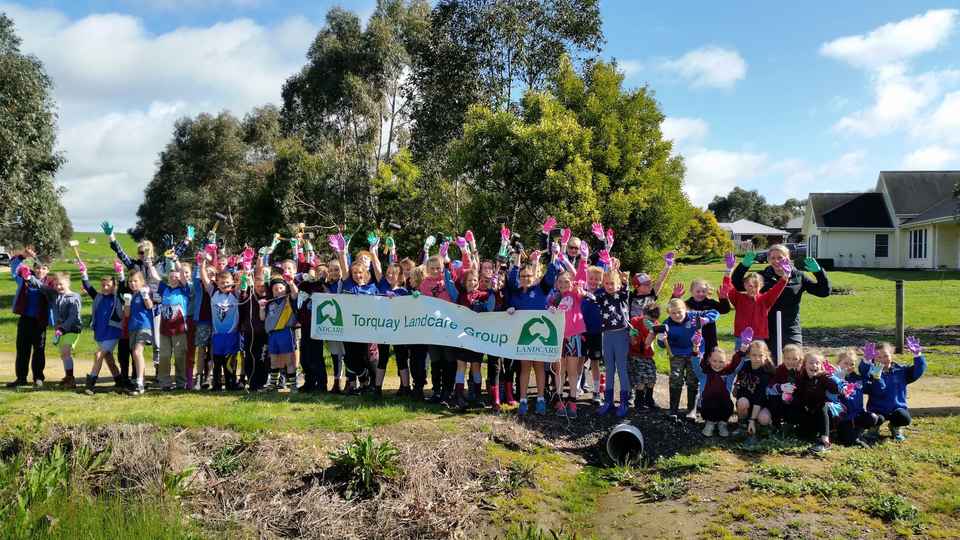 400 seedlings, mulching, and cleaning up last years work, all to be completed in a few hours!

Though rain had fallen for two days prior to the Greenfield planting, Friday morning was dry, relatively calm and the most importantly the sun was out. The day was looking good.

Gabrielle arrived early to spread mulch and was soon joined by other SCS staff tidying up spots where the layers were too thick and beginning the process of digging holes with the mechanical auger.

In the meantime the TLG team arrived and began to set up the gazebo, lay out equipment and do a final check of the site. Graeme Stockton appeared delivering the seedlings and began the process of laying out the landscape.

As 10.00am approached noises could be heard from Greenfield Drive as the early runners arrived at the end of Earl Court. The rest of the students and their teachers were soon with us, and it was time for introductions, explanations, questions and a safety chat.

These students were well and truly ready for action, so a quick photograph and they were off in small groups for a planting demonstration ably shown by TLG volunteers like Graeme B.

The students had accepted the day’s challenge, 400 seedlings to be planted, and using the guards no longer required from the last two plantings. With plants going into the ground Terry and Brian were busy preparing lunch and Pam was out and about taking photographs.

Progress was fast and as it got closer to lunchtime the pots were empty, and gathered into long black snakes. The sausages were still cooking so the two classes separated and headed off in opposite directions to clean up the previous year's planting, removing guards, taking out the occasional weed and collecting numerous stakes.

Buckets filled with water, soap and towels then met the groups as they headed up for lunch. These were hungry bodies and it was not long before everyone was eating, and talking about their experience. Seconds for those that wanted it, followed by carrot cake, apples and to top it off a chocolate frog for the walk back to school.

Before heading back though there were many to thank, in particular acknowledging the work involved in preparing the project, and the support provided by local companies, Ryan’s IGA, Bakers Delight, and Bunning’s.

There is no doubt from the reactions of many of the students that they really understand and appreciate the difference days like this make to their environment. Their - because for some students this was very personal and they intended to water, weed and monitor the progress of their plants.

Thank you to all involved in the day.