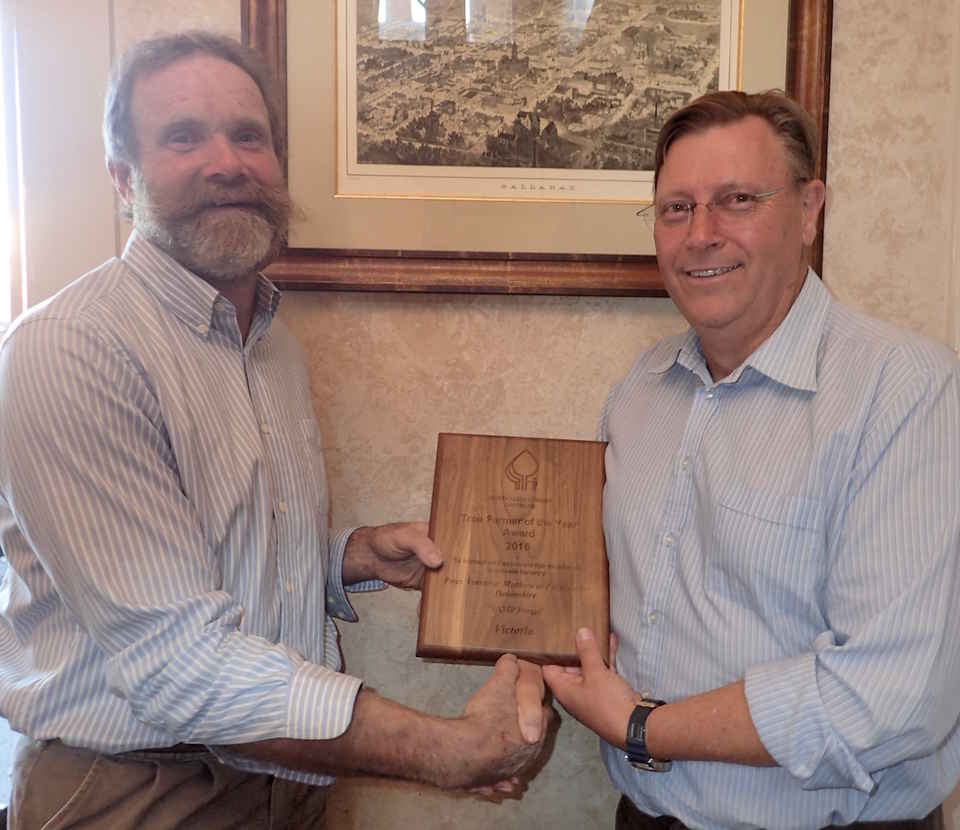 The Victorian Tree Farmer of the Year is Peter Devonshire, a former Ballarat boy. He was given his award last week by Australian Forest Growers Ballarat branch President,

Phil Kinghorn (pictured on left). The award was for his long standing forestry career and his innovative work in what Peter describes as “biodiverse agroforestry.”  Similar to analogue forestry, biodiverse agroforestry shares a commitment to add habitat for wildlife into a plantation, as well as other non-timber forest products like seeds and fruit.

A professional forester with a career focused on softwood pine harvesting, ten years ago Peter Devonshire was offered the chance to buy an unmanaged pine plantation at a knock down price on a steep site in south Gippsland. He took a punt, harvested the 8ha of pines and then watched in horror when heavy rain sent three tonnes of topsoil tumbling into the gully below. So he took another punt and made the daring decision NOT to spray the site and planted spotted gum and yellow stringybark at 500 stems per hectare, hoping that they would outcompete the weeds that would inevitably come back on the now razed site.

Imagine his surprise when what outpaced the planted eucalypts were not weeds, but local indigenous species like silver wattle, messmate and dogwood. They blanketed the site, not only holding the soil, but moreover gifting Peter with his very own weed-free biodiverse agroforest, including shrubs and understory as well as trees.

Nine years on, the site has the look and feel of natural forest. So much so that Trust for Nature  has deemed his biodiverse agroforest as worthy of classification.

President of the Gippsland Agroforestry Network, Peter loves his forest and the magnificent views he gets from the new house he's built on top of the hill above his forest. His aim as he nears retirement age is to leave the land in a better condition than when he bought it.

He's trying to add to his natural forest, but having problems... The naturally regenerating silver wattle are threatening to overtop his eucalypts. That’s easy to solve by selective ringbarking. A bigger problem are the wallabies that have moved into the new habitat he's created. They regard Peter's attempts at further plantings of spotted gum tubestock as delicious tidbits, ripe for the taking right on their front doorstep. He’s had to install a wallaby-proof fence: “They’re not the only ones who benefit from my forest,” he remarks wryly. “There are the koalas, bees and birdlife, and I have plans for posts, poles and firewood from the prunings and thinnings.”